4 considerations to identify the ideal channel for testing 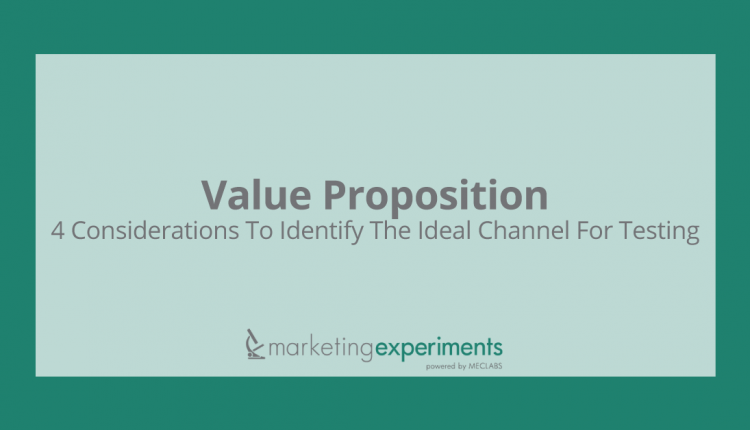 In my previous MarketingExperiments Blog post, I presented 3 steps to take in laying the groundwork for value proposition testing. In that post, I covered brainstorming value points, identifying supporting evidence and categorizing information into testable buckets.

While the lessons learned through these steps are valuable, the real prize comes from the ability to use those discoveries in a value proposition experiment. However, there’s still much to be considered before you’re ready to launch your first test.

So in today’s post, I will continue where we left off and explain the next step in developing a strategy for a solid value proposition test.

Before you begin to think of the ways to express your value proposition, you first have to understand the limitations created by the channels utilized to build your test.

We will always aim to find that perfect channel – the one that provides you with everything you ever wished to know about your customers – but oftentimes, that channel doesn’t exist and we have to settle for good enough.

Today, we will dive into four areas you need to consider in order to identify that ideal channel for testing:

Consideration #1. The amount of traffic in the channel

The first consideration you need to make is the amount of traffic into your channel. This is because in value proposition testing, we often have to duplicate a portion of the content between treatments in order to provide enough information to communicate value for the product or service.

Though necessary, this duplication of information can often lead to treatments performing similarly in a test because they are perceived similarly by visitors. Because of this, it’s important to run tests within channels that have high traffic levels.

The more traffic a channel has, the larger sample size you will have from the tests, and inherently, the faster real trends can emerge from your data.

Some examples of high traffic areas where I’ve witnessed value proposition testing take place include PPC advertising – both banner and text – as well as on homepages and product pages.

One caveat here worth mentioning is the challenge with reaching validity when it comes to highly specialized products.

Though it would be nice to learn something about our niche audiences for those highly defined and specialized products, if you don’t have sizable traffic visiting those respective webpages (thereby entering the channel), you may not be able to reach statistical validation in a reasonable amount of time.

I would love to be able to include the ideal number of visitors you need in your channel, but that number is only one of many variables that impact the time needed for you to reach a sample size large enough to reach statistical validation.

What I can tell also tell you is the more visitors you have, the more flexibility you have with regard to the number of treatments you can run, the conversion rates you can reliably work with, and the amount of variables you need to change to measure a difference.

Consideration #2. The existing motivations of your visitors

The second consideration is thinking about the existing motivation of visitors to your channel.

It’s very important to know if visitors are sufficiently motivated to pursue the product or service you’re promoting. It doesn’t make sense to offer a winter coat to someone living on the equator.

It also doesn’t make sense to try to sell that same coat to someone living in the Arctic Circle and then compare the responses between said prospects as apples to apples.

Those customers are way too different to generalize their responses across an entire product or service market vertical.

For a general example, it’s OK to test the value proposition of a car company in an advertisement posted on a website for auto enthusiasts.

But the same ad likely wouldn’t be as effective on an informational website for new mothers. Though you would likely see interaction with both ads, the mixing of markets would act to muddy the results of your test as the interaction in both places is teaching us about largely different audiences.

Consequently, instead of concentrating on learning what your ideal customer values about your car company, you would instead be mixing the views of your real prospects with the views of someone who may never look at another one of your advertisements, let alone buy this year’s new model.

The main takeaway here is always make sure that the visitors to your channel are all similarly motivated to learn more about your product or service. You can’t track clicks if no one is motivated to click.

Consideration #3. The need for imagery

Another consideration to make is whether or not you need an image to help express your value proposition.

Is your product’s quality exemplified in its appearance, or are you selling something that is more intangible? If you do have a product or service that garners a large amount of value from visual appeal, you should definitely consider a channel that allows for the inclusion of an image.

A great first test could be as simple as designing treatments with different product shots to identify which picture resonates best with your audience. An image test could provide a lot of discoveries beyond the simple picture B works better than A, C and D.

As the saying goes, a picture is worth a thousand words. The differences between the images could act as the jumping-off point for future treatment ideas for copy changes.

There are many ways that the details from a winning image can be expressed in words. Ultimately, value proposition testing will provide you the ability to identify those details your customers find most appealing.

Consideration #4. The ability to split traffic

Finally, you need to consider whether or not you have the ability to split traffic for your test.

General Web traffic, for example, has multiple tools and platforms you can choose from to split traffic to your webpages. A simple Google search for “website optimization testing tools” can put you on the right path to finding one that works for your needs.

On the other hand, complex forums with loads of options for user interaction that dynamically updates both the content and channels really makes splitting between those visitor experiences next to impossible for most testing purposes.

Just remember, for a test to be truly valid, you need to ensure that your traffic is being split between the treatments as evenly and randomly as possible.

The splitting tactic I’ve witnessed most frequently has been conducted with a platform like Adobe Test&Target for example, where Web visitors are randomly split before they reach a target page or treatment.

I have also seen splitting conducted within Google AdWords, where an even rotation between a set number of PPC ads can be created specifically for this purpose.

Ultimately, the trick as I mentioned is getting as close to an even random distribution of your audience with similar motivations if possible without threatening the validity of your results.

With the rising interest in online testing, it’s becoming easier to test across all channels and platforms.

However, if you’re currently unsure if you have the ability to split traffic on the channel you’re considering, I would suggest chatting with someone in IT or Development.

If they don’t have the answer to some of your concerns, I’m willing to bet they might know of a link or a number they can use to help you find it.

Also, consider that Rome was not built in a day

Yes, there is a hefty amount of background work that needs to be completed to test value propositions.

There are also a handful of key choices to make in choosing the right channel for your testing efforts.

And yes, there is still a lot of work that is left to be done after the data starts rolling in.

But don’t get discouraged.

I assure you, the lessons you will learn through a well-planned and executed value proposition test will translate into measurable ROI in the years to come.

Rome and the Internet weren’t built in a day, you know.

Conversion Rate Optimization: Why is split testing so powerful? [More from the blogs]

Can I Test More Than One Variable at a Time? [Video]

Copywriting: Do you take your prospects on a journey?