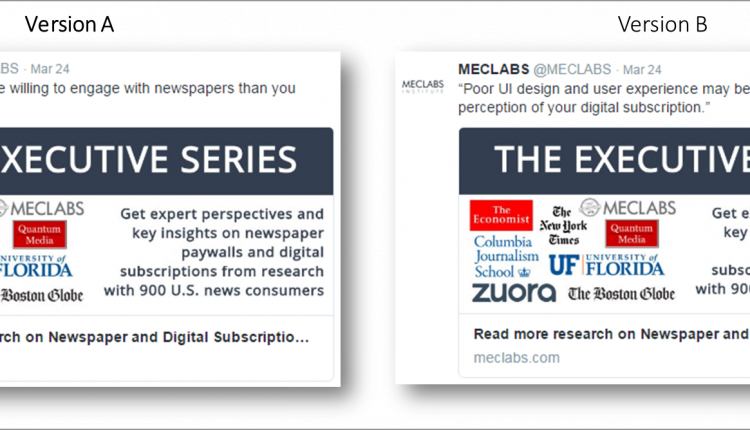 During last week’s Web clinic, “Does Fear-based Marketing Work?,” we looked at a recent Twitter test run by MarketingExperiments’ parent company MECLABS Institute in promotion of the latest issue of the Executive Series.

Which tweet do you think achieved a higher clickthrough rate?

Here’s some context in case you need help choosing …

In Tweet Version B, the message taps into an implicit fear that a marketer may have — that poor design is negatively impacting performance.

OK. Now make your choice. You can say it out loud if it will help you.

Whatever you do, don’t look directly below this line of text.

If you guessed Version A (without looking), then congratulations. You win an imaginary thumbs-up.

Here’s where it gets a little more difficult:

Why do you think Version A won?

What you have to do now is create a hypothesis. Here’s the thing about hypotheses, though: they’re more tricky than you would anticipate. Hypotheses are only guesses to be tested.

Luckily, our team of expert Web clinic writers have created a hypothesis for you.

Here’s the short version of their hypothesis:

Want the long version including five other real-world examples and research to back them up?

That is all included in the full video replay of the Web clinic.

Also, if you’d like to read the full case study featured in this Web clinic, which describes how cybersecurity giant Symantec increased net revenue by $45 million by following these same principles, check it out at our sister research company, MarketingSherpa.

Is Your Company Embracing ‘Fear-Based’ or ‘Fear-Less’ Marketing in 2012 and Beyond? [From MarketingSherpa Blog]

The Charm of Three: How people process positive claims in persuasion messages