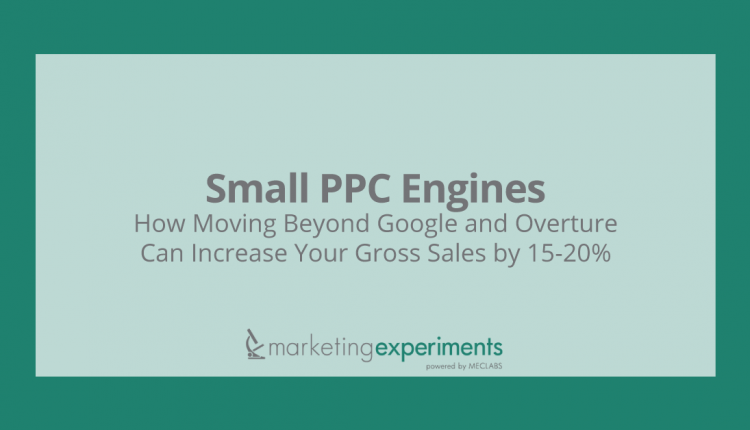 At MEC, we have found that in most cases, the “Two Big Pay-Per-Click (PPC) Engines” (Google Adwords and Overture) produce more traffic than all of the other PPC engines combined. (A series of reports listed at the end of this brief cover these engines in detail.)

In addition, we have found that the QUALITY of traffic (based on conversion rate) from the Big Two tends to be higher than that of the smaller PPC engines. Sales or conversions are usually higher for most products and services listed on Overture and Google Adwords.

This brief will share the results of a new research project at MEC designed to answer these two questions.

First, we tested one small search engine to determine the volume of traffic that could be generated. We selected Enhance Interactive (then known as Ah-Ha) for our initial test. We tested 31 keywords for one of our research partners specializing in health and beauty products. This partner had used these terms on the major PPC search engines with great success.

Here were our initial test results with Ah-Ha:

The results look even better if we look at the busiest 7-day period:

What You Need To UNDERSTAND: Over the peak 7 days of this campaign, we generated 4,246 clicks, or over 600 clicks per day.

We found that we could generate a significant amount of traffic if our CPC was at the right level. Many keywords on these smaller PPC engines were available at a very low CPC, but if you choose words that receive very few clicks or do not have competitive bids, your bids may not be included on these engines’ partner or affiliate sites, which are generally where most of the traffic comes from.

While the traffic generated in this test may not sound that impressive, keep in mind that during this same 27-day period, this merchant only received about 6,000 clicks from both Google and Overture at a CPC of nearly three times that which was tested on Ah-Ha. During this time period Ah-Ha produced more than twice the traffic that both Google and Overture produced at one-third of the average CPC.

Before you get too excited, we must mention that while we found an enormous surplus of traffic on Ah-Ha, this traffic converted at a very low level. In fact, it converted at less than a tenth of what we averaged on Google and Overture. Our Ah-Ha test was unprofitable.

For this specific research partner, we concluded that the best way to proceed in this particular PPC search engine was to lower bids drastically to near minimum levels and let traffic trickle in.

KEY POINT: There is no “magic formula” for success with these smaller PPC engines. What works for one merchant on a given PPC engine may not work for another merchant or for the same merchant on another engine. You must always test and track individual PPC campaigns independently.

We have answered our first question: Smaller PPC engines can produce enough traffic to warrant the hassle of submitting your keyword listings. Below, we mention a number of engines that show promise, as well as some advice for developing effective campaigns.

But before reviewing this information, you may want to consider our second question: Is it worth your money to pay for clicks from the smaller PPC engines if they convert at a lower rate?

What were we were able to discover in testing these small search engines is that while lower CPC bids may be readily available, traffic often converts at a level that is atypical of the major engines.

Take a look at the results from test subject number two:

What You Need To UNDERSTAND: While Google had the highest conversion rate (followed by Overture, FindWhat, and Ah-Ha in descending order), Ah-Ha actually generated the highest Return On Investment (ROI), followed by FindWhat, Overture, and Google (the OPPOSITE order of conversion rate). This was due primarily to the much less expensive CPC average on the smaller engines.

In the Ah-Ha campaign, the ROI was very high. Although the small PPC campaigns typically converted at a much lower rate, their low cost-per-click prices (due to less competition and lower minimum bids) catapulted the ROI beyond that of the large PPC campaigns.

KEY POINT: As with any marketing campaign, pay close attention to your metrics. Although a lower CPC is attractive, it does not guarantee that a given campaigns will be profitable.

The following resources and guidelines will be useful when evaluating smaller PPC search engines:

Small PPC search engines can provide a significant boost to your overall marketing results. We have seen merchants produce an increase of as much as 15-20% of gross sales using smaller PPC engines.

How to Assess the Quality of a PPC Engine ***
http://www.payperclickanalyst.com/article-duncan-parry-003.htm

The Psychology of the Searcher: How knowing how our prospects search can help us to…

PPC Ads: What is search engine marketing best used for?