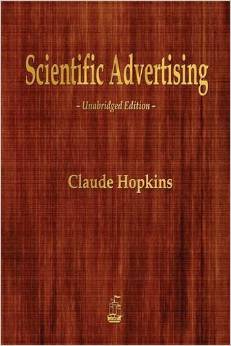 Have you ever read an advertising or marketing book more than once? How about more than twice?

David Ogilvy once insisted about a book,

“Nobody should be allowed to have anything to do with advertising until he has read this book seven times. It changed the course of my life.”

What book was he referring to?

Marketer, meet Claude Hopkins, one of the original 1920s ad men who could masterfully blend both art and the rigor of science to marketing campaigns. He is known for many iconic ads of the past, including Pepsodent Toothpaste, which some credit with getting Americans in the habit of brushing their teeth.

Hopkins was studied and admired by both David Ogilvy (who most of us know) and Rosser Reeves (who many of us know as Don Draper).

Hopkins summarized his theory of advertising in a short, easy-to-digest, book called Scientific Advertising. This was Ogilvy’s go-to book. I remember the first time I read through it. What really struck me about it was its relevance to what we were discovering (or I guess is should say rediscovering) almost a century later here at MarketingExperiments.com.

Now, I confess, I am only on my third round through this book, so I know I am not quite yet fit to work for Ogilvy, but I thought it would be fitting to share with you a few of Hopkins principles that seem relevant for us to remember nearly 100 years later.

First, Hopkins warns the reader, “The people you address are selfish, as we all are They care nothing about you interests or profit. They seek service for themselves. Ignoring this fact is a common mistake and a costly mistake in advertising.”

Much of the advertising in Hopkins day had turned inward and focused primarily on what the business wanted the customer to do — mainly buy a product or service. They had forgotten that before you can move someone to action, you have to help them understand what is in it for them.

It’s humorous sometimes how we can fall into the same trap today as advertisers. You can see it in something as simple as our call-to-action copy. We use phrases like, “Buy now,” “Add to Cart,” “Register” or, even worse, “Submit.”

All these display the symptom that Hopkins was getting at — we are too focused on what we want from the customer, rather than what the customer wants from us.

We run simple A/B experiments (like this series) all the time in which changing emphasis from something like “Buy Product X” to “Get Product X” has a significant impact on customer response.

And it does not simply come down to using a word like “get.” It’s about the mindset behind the word “get.” As Hopkins pointed out, people are interested in what they “get,” not what the business “gets.”

This is as true today as it was then, and the most effective marketers today know how to empathize with the customer.

In the ’20s, Hopkin wrote, “Platitudes and generalities roll off the human understanding like water from a duck. They leave no impression whatever.”

If this was true in Hopkins day, how much more true is it today, when the average consumer is bombarded with hundreds of marketing messages a day?

Hopkins continues, “To say, ‘Best in the world,’ ‘Lowest price in existence’, etc. are at best simply claiming the expected. But superlatives of that sort are usually damaging. The suggest looseness of expression, a tendency to exaggerate, a careless truth. They lead readers to discount all the statements that you make.”

If anything, consumers today are more jaded than they were in Hopkins’ day. The average postmodern consumer meets our campaigns with a disposition of disbelief. As Hopkins pointed out almost a century ago, and our experimentation confirms still today, our value claims must be stated with a degree of specificity to establish credibility.

In Scientific Advertising, Claude Hopkins was trying to close the gap between what advertising had become and what it should be. “Advertising is Salesmanship … the only purpose of advertising is to make sales … It is not for general effect … It is not to keep your name before the people … Treat it as a salesman. Force it to justify itself.”

In Hopkins day, advertising had forgotten its objective. It had become fluff that simply tried to bring some general sense of awareness, but it was not held to the same standard as the average salesman in his day.

To intensify his point, Hopkins pointed out that, “Some people spend $10 per word on an average advertisement. Therefore, every ad should be a super-salesman.”

Ten dollars per word? That’s nothing, Hopkins. Today, we spend over $100,000 per second of airtime during the Super Bowl. It is obvious the stakes are as high, if not higher, today when it comes to justifying our marketing. The question is, are we holding our advertising to the basic standard of producing results? Or as Hopkins might put it, are we still putting up with a lousy salesmanship?

PRINCIPLE #4: Advertising is a science

Finally, Hopkins states that “The time has come when advertising has in some hands reached the status of science … we learn the principles and prove them by repeated tests. This is done through keyed advertising, by traced returns, largely by the use of coupons.”

If only Hopkins could know that in just a few generations, the Internet would enable us to observe consumer response to marketing campaigns in real-time.

But still, he reminds us that, even in the past, advertising is not primarily speculation, but science.

It involves human decisions that can be tracked, observed and patterned. We may not have all the answers to why people say “yes,” but we do have the tools to discover the answers to these essential questions at the heart of all advertising.

The tools and our ability to listen and observe to the customer will only increase as technology does. Marketer, we have no excuse today for not turning to craft of marketing and advertising into, as Hopkins says, a science.

Was Ogilvy right about Hopkins?

Perhaps reading Hopkins seven times is a bit extreme, but I would agree with Ogilvy — anyone who is trying to market an offer to a consumer would benefit from reading Hopkins.

Hopkins wasn’t the first to leverage advertising as a scientific window into the psychology of the human decision process. He wasn’t the last to transcend intuition with science when crafting advertising campaigns.

However, for a guy who probably never conceived of the tools marketers and advertisers would have at their fingertips today, he did hit the nail on the head when it came to his approach to advertising and the principles he discovered in his day.

So, if you are looking for a good marketing or advertising book to start off the year with, let me join Ogilvy and encourage you to pick up a copy (or download a now publicly-owned electronic version) of Hopkin’s classic, Scientific Advertising.

Display Advertising: 3 basic questions every marketer should ask themselves about banner ads [More from the blogs]

Value Proposition: Which of your value claims is most appealing to new customers? [More from the blogs]

Email Marketing: How responsive design might improve your emails