Becoming An Entrepreneur: Factors to consider when launching an Internet-based startup business 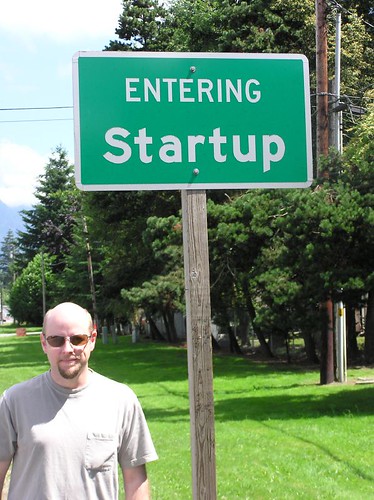 EDITOR’S NOTE: Historically, at the center of the trough in an economic recession, extended unemployment serves as a catalyst for starting small businesses. Entrepreneurship can be very appealing, with dollar signs popping in your eyes as you think of the Google/Facebook/Your Next Company Here billionaires.

Yet while you might be highly skilled at your own profession, being the boss means so much more than knowing how to do what you do well. From my own (extremely minor) foray(s) into entrepreneurship, let me assure you the hardest part is the required intense focus on things you really don’t care about.

When considering starting a business you’re likely already focused on the critical micro elements (your skillsets, potential customers you may know, a snazzy logo) and don’t have the resources for an on-staff Economist/Researcher. So below are a few things this Editor really doesn’t care about, but you should if you’re thinking about making that leap.

Director of Sciences Bob Kemper was kind enough to share some observations about recent and emerging legislative, economic and societal trends that, though they’re broad-ranging, will have a disproportionate impact on the success of smaller businesses and start-ups.

I’ve spent a little time over the last few months researching and reflecting on recent events and changes in the macroeconomic and societal environment, which led me to consider what they might mean to a small Internet-based business or to someone considering starting one.

The list of key (internal) factors essential to starting and running a successful online business is long—as is the set books and other resources that enumerate them.  Yet, even the best-of-the-best at those remains subject to a host of uncontrollable factors that, if unseen or unheeded, could undo the business.  From a law change at the capital that cuts your legs out overnight to the slow suffocation of an emerging trend in technology or consumer sentiment, these external threats are real and tangible.

It’s to those same factors though that our iconic Internet startups owe their very existence.  The first century Roman philosopher and politician Seneca quipped that “Luck is what happens when preparation meets opportunity.”  From Microsoft to Google to Twitter, the convergence of exceptional internal capabilities (preparation) and a favorable external environment (opportunity) led each to an epic run of good luck.

Following are a few currently relevant external factors that have smiled on the likes of Gates, Brin, Dorsey, et al., and that could be sources of threat or opportunity for any who’d seek to emulate their good fortunes.

The worldwide economic meltdown that began in the Fall of 2007 and accelerated through 2008, culminating in the collapse of U.S. Real Estate prices and serial liquidity crises in the U.S. and abroad among lenders and investors, resulted in a deep and extended recession and in the tightest credit and investment capital markets in more than 80 years.

While some sectors of the economy have begun to show signs of recovery, investors remain decidedly cautious and investment risk premiums remain historically high—particularly for small-cap and privately held companies. Even so, as credit and capital begin to loosen, the sectors most likely to open up first are those which historically thrive in a down economy and—because of the unique characteristics of this recession—those least dependent upon Real Estate and commercial property values.

Key Question: Internet-oriented services business score well on the first factor, so the second factor will likely be your focus. Which sector(s) will you serve?

During the last several years, there have been significant advancements in both website development tools and protocols, and in database and application development platforms – both of which lend themselves to rapid application development and deployment. This trend favors both companies that are agile in decision making and those that employ full-time, dedicated technical professionals.

Key Question: Your small size will make you agile, but do you have the resources to hire, recruit, and retain technical professionals? If

not, how will you compensate (outsourcing, etc)?

The combination of a justifiably suspicious consumer population and the increasingly fervent public debate over personal privacy, spurred on by a seemingly constant stream of high-profile news stories exposing both the intentional misuse of, and the accidental disclosure of private information resulting from corporate security breaches, has led to a broad array of both federal and local legislative proposals seeking to limit and to regulate the collection and use of personally identifying information both in the U.S. and abroad.

In just the last several years, a host of laws regulating the collection and use of personally identifying information over the Internet have been enacted, including the federal Electronic Communications Privacy Act (ECPA)[1], the federal Children’s Online Privacy Protection Act (COPPA)[2], the USA Patriot Act of 2001[3], the federal Health Insurance Portability and Accountability Act (HIPAA)[4], the Foreign Intelligence Surveillance Act of 1978 – Amendments Act of 2008 (FISA)[5] and many similar laws enacted by states, most pertaining to the practices and policies of government and employers in their jurisdiction.

In addition, the rate of new complaints and calls for further regulatory action continues to rise[6]. A thorough and continually updated treatment of Internet privacy and associated federal, state and international laws can be found in the Privacy Rights Clearinghouse’s topical “fact sheet” titled “Fact Sheet 18: Privacy and the Internet: Traveling in Cyberspace Safely”.

Add to this already strong momentum toward increased regulatory restrictions on Internet marketing practices, the intentions of the present White House administration – both stated and implicit – toward greater government regulation and oversight, and it should be presumed that some of the customer segmentation and targeting methods that have recently emerged may soon be significantly restricted – or even prohibited – by federal law as unfair or unduly invasive of personal privacy.

Key Question: Data is the lifeblood of the evidence-based Internet marketer, so this will likely be a necessary consideration. What strategic alternatives do you have for collecting and using information about customers – both to match them with potential partners, and also to other products and services that may be ideally suited their needs and their motivations?

SOCIO-CULTURAL In the last ten years, the relative scope and volume of information available online has grown explosively – driven primarily by the emergence of enormous and pervasive search networks, and global information repositories such as Google and Wikipedia.

The corresponding trajectory toward an “oligopical”—and plausibly a monopolistic—market profile within the coming two-to-five years represents a significant threat not only to the other competing search networks, but also to advertisers.

On the international level, the market share imbalance may be even greater. A report from the AT Internet Institute indicates that Google’s market share in France for February 2009 exceeded 91.2%, and comScore reported Google’s March 2009 market share in Belgium as 96.00%, with Yahoo and Live Search accounting for the bulk of the remaining 4%.

Add to this somewhat alarming state of the competitive search market, the staggering level of investment by Google in both hardening its existing core of dominance and in aggressively expanding into other loosely-related markets traditionally led by others – such as the Internet Web browser (Google Chrome), global mapping and geo-location based search services (Google Maps / Google Earth) and office productivity applications (Google Calendar / Google Docs), let alone entertainment, social media, mobile device apps, and photo-sharing spaces (YouTube, Google Wave, et al., Android, and Picasa Web Albums respectively) – and one might conclude that a proportional investment in anti-trust attorneys should round out their growth strategy.

While the growing imbalance in relative market share among the search networks is a potential source of vulnerability for all online advertisers, those businesses that currently depend almost exclusively upon Natural Search (SEO), may be disproportionately at risk.

That is, as Google continues to expand into an increasingly broad range of non-search-specific services, it will simultaneously begin to compete directly against an ever-increasing proportion of its advertisers.

Since Google is a Ninja master of profit-maximization, the second to lose among Google’s field of new competitors in a given market would “naturally” be those who are already paying them the least for favorable ad placement – i.e., right behind those who are not paying them at all (for SEO traffic).

Key Question : Is your business model centered around organic search traffic from Google? What other options might you have should this develop into a strategic threat?

If you are considering a business that will rely on Internet marketing to a large extent, keep these overall driving forces in mind:

Domain/Product Name Testing: Our testing demonstrated that choosing product, service, or domain names based on what you “like” can cost you dearly

Bob Kemper, Senior Director, Research and Development, MECLABS Institute. As director of sciences for MarketingExperiments’ parent company, MECLABS Institute, Bob manages enterprise experimentation and discovery processes for the corporation and for the individual operating companies, including MarketingSherpa. He serves on the Curriculum and Alumni boards for the Executive MBA program of the Davis College of Business at Jacksonville University and on the board of the Jacksonville chapter of the National Association of Business Economists (NABE). Over the last 25 years, Bob has practiced and managed engineering and business operations in companies ranging in size from 12 to 55,000 employees, and served as Manager of Technology Planning & Asset Management, Director of Finance, and Chief of Operations. Among his personal interests, he lists tennis, gymnastics and applied statistics.

Social Media and the CEO: Does Twitter know more than Henry Ford?