Value Proposition: 3 lessons to learn from the Microsoft Surface campaign 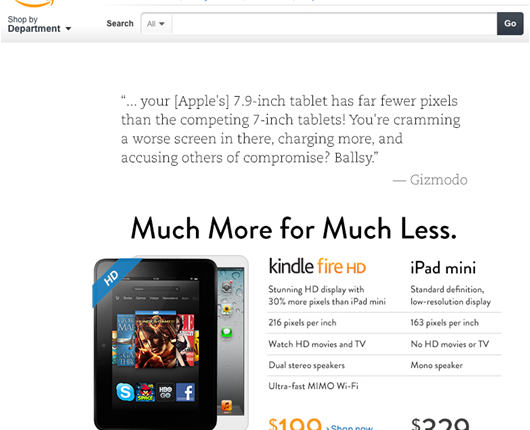 In any aspect of marketing, it all comes down to value proposition. A marketer’s job is to communicate the value of a product or service to a potential customer.

Even companies with big advertising budgets can lose sight of the necessity and responsibility of every marketer to convey value – they may actually be more susceptible to it.

For instance, ever since Apple’s renaissance, pretty much everyone wrote Microsoft off as the poor (and old) man’s Apple. Even they seemed to, with its not cool enough to be a Mac ad campaign a few years ago.

With all of the recent talk about Windows 8, and the debut of the company’s first tablet, Surface (set up to be an iPad competitor), a Cinderella-story comeback seemed possible. Maybe not likely – but possible.

When Microsoft announced it wasn’t going with one of its usual three agencies (Crispin Porter & Bogusky, Deutsch or Razorfish) to produce an ad for the Surface — instead choosing the relatively unknown 22-year-old Caleb Slain, who incredibly made Internet Explorer cool again with this ad — I thought Microsoft might pull it off.

However, instead of spotlighting the sleek and cool but extremely product-focused video that Slain created, the one I see on a constant loop is the incredibly distracting (and after the tenth view, annoying) dancing people and clicking noise ad, as seen below:


Let me make this disclaimer before we go any farther: I liked the ad, but I hated the sacrifice of value proposition it made in favor of the cool factor – because it is possible to have both. Just ask Microsoft’s competition, Apple.


“The click” is the highlighted aspect of the ad, an external keyboard that attaches to the tablet. Other than that, I’m just not sure what is supposed to motivate me to purchase the Surface. The krumping school girls? Maybe the ability to leap through mid-air while clicking into place the keyboard that comes with it?

“I think the only people who have a legitimate chance of going to the store and purchasing are people who are sold on Microsoft already,” says Adam Lapp, Associate Director of Optimization, MECLABS, adding, “The ad doesn’t do anything to distinguish itself from the iPad, and you don’t even know cost. It does nothing to motivate you to learn more.”

As you design your own ads, consider these three steps to create an ad with a strong value proposition.

A big mistake of Microsoft’s, according to Adam, is not considering the customer’s buying process and anticipating the questions and needs they will have.

“A lot of times people create marketing material without considering the customer’s buying process,” Adam says. “[Consumers] don’t go straight to Microsoft – they go to Samsung, they go to Apple, they search, and then they make their decision. If you’re not mimicking that journey with your own strategic planning, then you are going to fail.”

With the recent ads for the Samsung Galaxy S III showing value proposition and the “cool” factor so well, by directly pointing out aspects in which it is better than its competitor (Apple), Samsung decisively threw its hat into the ring, and made a big impression doing so. 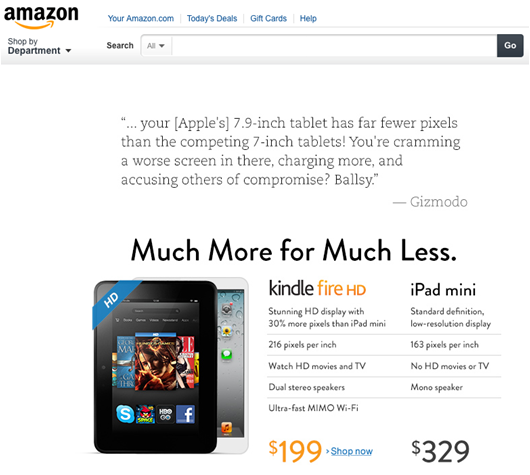 Amazon also recently made a very clear play for the iPad customers by leveraging its highly trafficked homepage to show the differences between the iPad mini and its product, the Kindle Fire.

With all of this competition in the tablet world, it kind of feels as if the Jets and Sharks gangs of West Side Story were suddenly dropped into south L.A. – fun dance moves and a catchy beat don’t get you taken seriously.

Adam took the video to the MECLABS optimization team for its input. The analysis of the ad all encircled one question: Where is the value proposition? Some feedback included:

Clarity was the biggest issue with this ad, and can be a problem with any marketer’s value proposition. Addressing the needs that will arise in the customer’s buying process will strengthen the value proposition as well as the consumer’s view of the product or service.

The keyboard is not a strong enough point to get people to change their minds and switch from Apple to Microsoft, Adam says. It may be a selling point, but certainly not enough to carry its entire advertising campaign.

It’s easy to get caught up in a great idea. But certain questions must be asked to ensure that you are really delivering essential value to the group you have identified as your consumers:

Step #3. Combine the value proposition with a great idea (and team)

Eventually, the suggestions of the MECLABS optimization team devolved into some pretty random but interesting ideas to improve the Surface commercial:

This exemplifies  two things: how quickly brainstorming can go in an unexpected direction, and, more importantly, how creative and fun a group of talented people can be. All of the above suggestions are the beginnings of ideas that, given some time and finesse, could make good ads.

And, that’s what Microsoft’s Surface ad is – a fun idea, but just “good” without any clear value proposition. What makes any appeal to consumers great is the due diligence of making sure value proposition is a priority.

Honest communication on the team is essential to mastering this combination, according to Adam.

“It’s easier to agree with something than to disagree with it – that goes back to hiring and how you structure your team,” he says.

Adam says MECLABS has had success with creating a team environment where “no one presents a finished product or launches a test before it’s vetted by the entire group.”

Value Proposition: How to use social media to help discover why customer should buy from you

Marketing Optimization: 4 steps to discovering your value proposition and boosting conversion (via MarketingSherpa)

Courtney Eckerle, Senior Managing Editor, MarketingSherpa. With a focus on inbound and email marketing, Courtney’s goal is to produce clear, interesting and actionable external content for MarketingExperiments readers. She earned her B.A. in English literature, mass communications and film studies from Saint Mary’s College in Notre Dame, Ind. She has worked as a writer and sports photographer for The University of Notre Dame Observer, and was a collegiate correspondent for USA Today College prior to joining MECLABS. In her spare time, Courtney enjoys kayaking, travel, reading and photography.