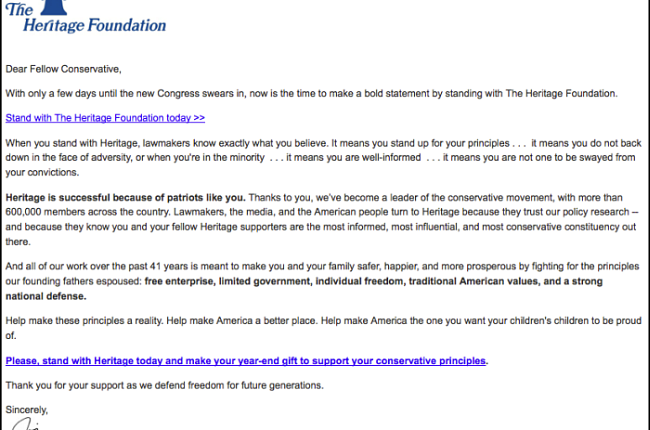 “People don’t buy from companies, from stores or from websites; people buy from people. Marketing is not about programs; it is about relationships.”

NextAfter, an organization dedicated to helping nonprofits discover what truly makes donors give, put this concept to the test during an end-of-year fund-raising push. Tim Kachuriak, the company’s Chief Innovation and Optimization Officer, is so passionate about this cause that he cut his family vacation short and flew cross-country to join us in the studio for the most recent MarketingExperiments Web clinic to share his results and show how what NextAfter learned could benefit any organization.

Research question: Which email treatment will generate the most revenue?

This email drips with formality and reads like a direct-mail piece. It begins with “Dear Fellow Conservative” and goes on to exhort the reader to “make a bold statement by standing with the Heritage Foundation.” It is signed by Jim DeMint, the foundation’s president. 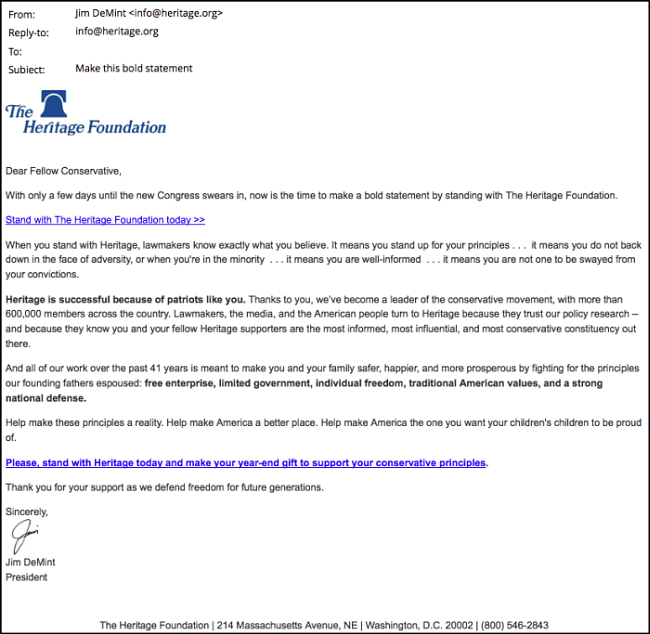 Version B appears to be a personal note. It starts out with “Hey there,” wants to see if “you’ll be able to contribute” and is signed by Christie Fogarty, Director of Membership. 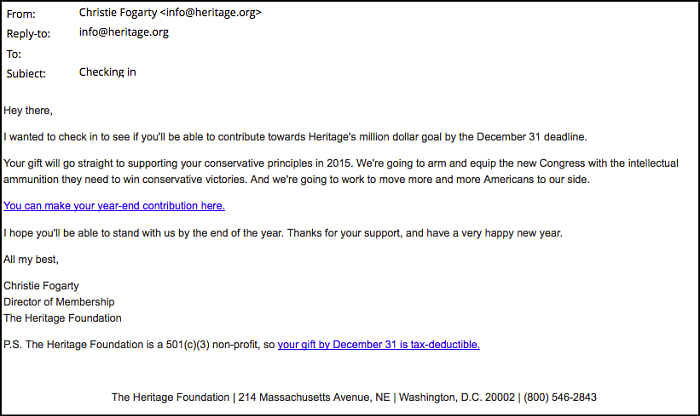 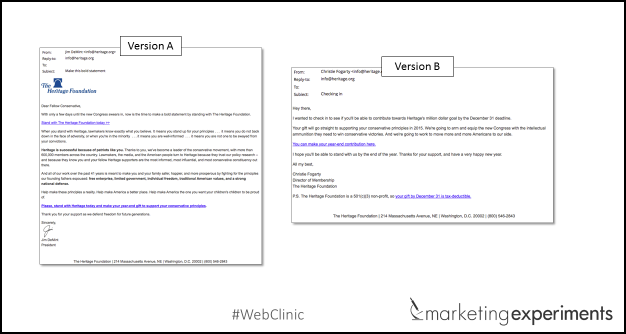 Version B does three things right to bring more humanity to its message:

It has the right representation for the conversation.


What’s more believable: getting an email Jim DeMint, a former U.S. Senator and political leader, or Christie Fogarty, a lesser-known staff member? A message that appears to be sent by a real person is much less likely to be deleted than one that looks like an email sent by a marketing automation system.

It has the right tone for the conversation.

Don’t market to people; communicate with them. The tone of Version A is so grand that it should be preceded by the rolling out of a red carpet and the sounding of a trumpet. In contrast, Version B is so conversational that it almost seems as if Christie Fogarty could have dashed it off at her desk just moments before.

It has the right level of clarity for the conversation.

People want to know what you expect them to do and why. Version A waxes poetic copy about conservative values, but it doesn’t tell the contributor how his money will be used beyond “supporting conservative principles.” It doesn’t even really ask for money until the end of the letter. The more casual treatment asks for money almost immediately, and explains that it will be used to “arm and equip the new Congress with the intellectual ammunition they need to win conservative victories … ”

This test teaches us to stop thinking of marketing as trying to get a contribution, sale or lead and, instead, think of it as building a relationship and communicating accordingly.

Crafting Relevant Email Messages: How to learn from your audience (From MarketingSherpa)

Sign up for next month’s Web clinic “How to Write Headlines That Convert: Key discoveries from a meta-analysis of 15 years of behavioral research“

A/B Split Testing: How to use the right test progression to get customer discoveries and results