3 strategies to improve testing operations at your company 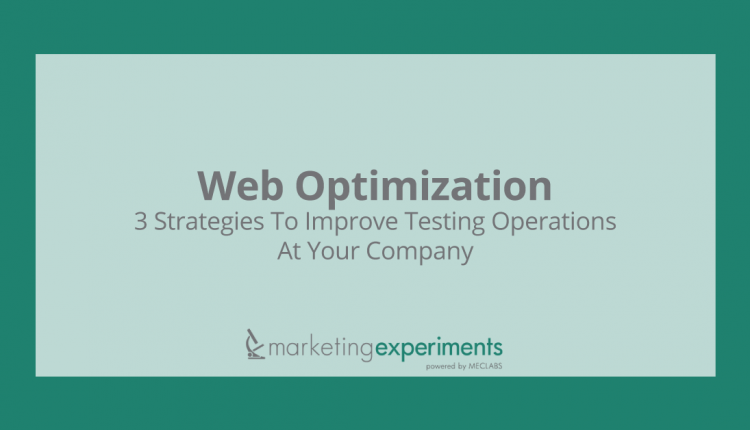 In a previous blog post, we detailed how Felix + Iris, a newly launched eyewear ecommerce site, made simple tweaks to its hero unit to improve home try-on conversion 72%.

In this blog post, read about how the Felix + Iris marketing team has embraced testing, and how the team shares results throughout the company. Read on to hear more from Jon Corwin, User Experience Lead, One Click Ventures (parent company of Felix + Iris), and how his strategies achieved testing and optimization success.

At One Click Ventures, the testing function exists in the marketing department.

“There is very much an iterative approach or kind of a lean methodology that One Click has taken,” Jon said.

Jon explained, as far as buy-in goes, testing is not something the team has had to convince others outside of Marketing of its value.

“It’s more of a conversation of what we should test – not whether,” he said.

Marketing team members seek approval from the content team on copy changes, or the design team for anything creative, typography or image-related. Jon also explained the team’s director of marketing will, from a strategic standpoint, help make those decisions.

However, Jon explained the testing function for marketing is autonomous.

“Our testing started off as a skunkworks operation. It was almost like scratching our own itch, and launching small tests and sharing the wins after the fact,” he said.

From there, he explained it has grown and the team has embraced it as another feedback tool to help keep the company a lean operation.

With the newly launched Felix + Iris brand, the team realized testing can be used as a tool to help manage risk.

Instead of buying into a new feature on one of the One Click Venture sites, the team can build a small prototype, launch it and validate that the feature is helpful, or not, with A/B testing.

Once the team has that knowledge, Marketing can send that feature to the tech team and have similar features built out, or use lessons learned from tests to better inform how they should craft future campaigns.

“Right now, it is very much a small operation, but one that has been key in helping make some of these decisions, be it design, messaging, new feature build-out, so on, so forth,” he said.

Jon explained there are many different ways the marketing team shares testing results within the organization.

Once tests are completed and the results have been analyzed, Jon will email those results to the stakeholders for that specific test. In addition, weekly conversion meetings, held by Jon, are used to discuss lessons learned from tests.

Jon and the team keep a master ledger of all testing efforts, called the Test Tracker, which is in the form of an easy-to-read spreadsheet.

“That’s where we’ll document all of the testing activity and final test results, with the goal being that that’s our testing bible filled with Felix + Iris best practices based on testing we’ve done in the past,” Jon explained.

With all of this constant optimization, Jon stressed the importance of sticking to a system to stay organized.

“As our testing chops have grown into their own and become more sophisticated, we’ve transitioned now into adapting more of a prioritizing framework,” he said.

Several elements go into testing prioritization by the team, including:

Jon explained in discovering the ease of a test, the team weighs and consults with the tech team to find out how big of a change will need to be made for the test to run.

For example, a small change would be copy or image changes, but more complex testing would involve advanced functionality or new feature build-outs.

“The tests that are a little bit more complex, while they certainly have greater, I argue, greater potential for the organization, we also do have to weigh that against some of the other more granular tests that maybe are just for informing us around a specific one-off campaign and its messaging,” Jon said.

Marketing Optimization: The 3 phases of evidence-based marketing [More from the blogs]

Testing and Optimization: 4 inspirational examples of experimentation and success [More from the blogs]