Personality Matters: How one company doubled its ROI by customizing ads based on personality

As marketers, we have the ability to use the digital footprint data of our customers to assess their personality, create messages that resonate with them personally and build more effective campaigns.

To see if this really works, let’s look at return on investment (ROI) results from a recent test of customized ads based on personality traits.

Sandra Matz and her fellow researchers from the Psychometrics Centre, University of Cambridge, collaborated with VisualDNA, an agency helping companies leverage psychographic audience data to better personalize their messaging. Together, they worked with an online beauty retailer to conduct an experiment on Facebook, and presented their results at the 2015 Annual Convention of the Society for Personality and Social Psychology (SPSP).

The researchers hypothesized that presenting customers with ads that fit their personality traits (extraversion or introversion) would result in higher ROI for the campaign.

To test their hypothesis, they created two sets of ads, one customized towards extraverts and the other tailored towards introverts. Although other personality traits could be relevant, the researchers picked extraversion/introversion for the test, because it was most conducive to creating contrasting ads.

Researchers described the typical extravert/introvert to designers, and the designers came up with corresponding ads. 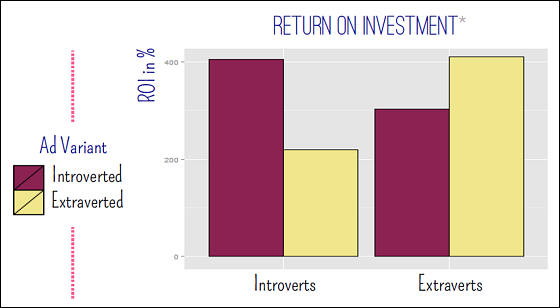 To sum up, personality can be a useful tool for better understanding your customers, creating marketing messages that will resonate more with them and increasing ROI for your campaign.

Although personality is a reliable predictor of behavior in situations when people have a fair degree of choice, different contextual factors (e.g., industry, complexity of the decision, social influence) can change the strength or even direction of this relationship.

Remember to study your customers’ personality-behavior relationship specifically; find out what personality traits your existing and potential customers have in common.

You can assess your customers’ personality internally, if you have enough dedicated resources, or you can outsource this task to a vendor. According to Vesselin Popov, Development Strategist, The Psychometrics Centre, University of Cambridge, one advantage of outsourcing personality prediction is that you can anonymize the data.

You don’t need to know your customers’ personal identity to learn what kind of messaging they would prefer.

Lead Nurturing: Market to personality and behavior, not job title (from the B2B Lead Roundtable blog)

Penn Researchers Use Facebook Data to Predict Users’ Age, Gender and Personality Traits (from the University of Pennsylvania)

IBM researcher can decipher your personality from looking at 200 of your tweets (by Dean Takahashi, VentureBeat)

Using The Big Five For Customised Advertising On Facebook by Matz, S.,  Popov, V., Kosinski, M., Stillwell, D., presented at the Annual Meeting of the Society for Personality and Social Psychology (SPSP), 2015.

How Customers Read Reviews: 4 takeaways for marketers from a business school study