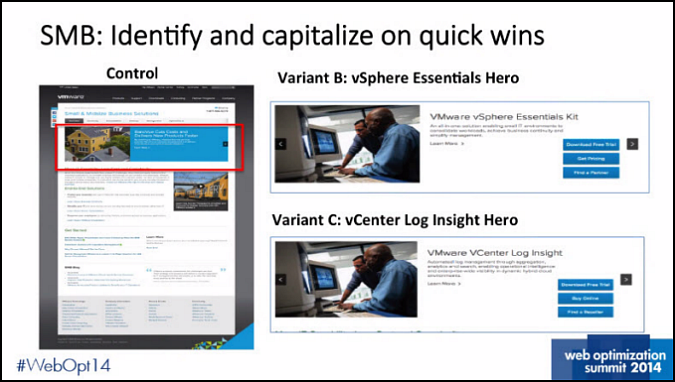 When it comes to testing, it’s exciting to focus on big tests, but being too focused on large-scale changes can hinder marketers from seeing smaller opportunities to test. Oftentimes, small tweaks to ads, copy or smaller webpage elements can lead to dramatic lifts. Cindy Lu, Senior Marketing Manager of Digital Marketing Strategy, VMware, is more than familiar with the lift potential quick wins can offer.

“For each company that I’ve actually worked at, I’ve had the opportunity to quickly identify some of the low-hanging fruit opportunities,” Cindy said. “It generally blows everyone away in your organization because they didn’t realize such small tweaks could have such meaningful impacts on actual conversions.”

At MarketingSherpa MarketingExperiments Web Optimization Summit 2014, John Tackett, Manager of Editorial Content, MECLABS, sat down with Cindy to discuss the five optimization lessons she learned from testing VMware’s website and conversion funnel. One of the most important lessons Cindy highlighted was identifying and capitalizing on quick wins.

Watch the session excerpt to learn how one of VMware’s quick win tests resulted in a 956% increase in clickthrough.

This test focused specifically on VMware’s small and medium business (SMB) segment. Cindy and her team saw an opportunity to test the banner ad in the hero spot of VMware’s SMB pages.

The control of this hero banner featured a call-to-action that drove the consumer to a PDF. The team decided to test directing visitors to the main products the company promoted to SMB users.

The team wanted to increase the “Try,” “Buy” and engagement clicks to these promoted SMB products. They conducted an A/B spilt test with two variants and a 33/33/33 split.

Variant B promoted the company’s vSphere Essentials kit, which, as per VMware’s description, includes an affordably-priced industry-leading virtualization platform for small businesses. Variant C promoted the vRealize Log Insight product, which is a real-time log management system for VMware environments. 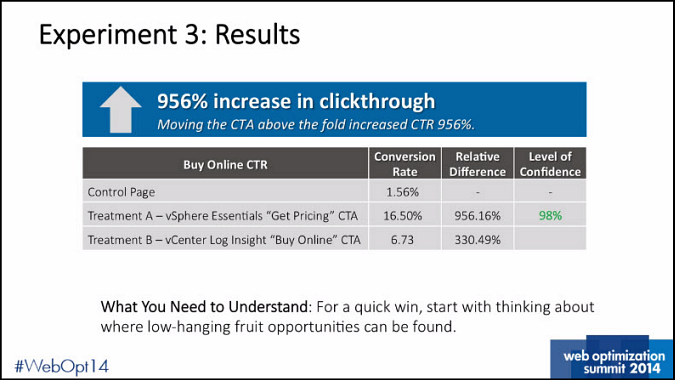 Cindy concluded by encouraging all marketers to look for quick win and low-hanging fruit opportunities as they optimize sites.

Kayla Cobb is a Reporter for MarketingSherpa. She’s pretty awesome, and you should really follow her on Twitter @itskaylacobb.

Reserve your seat at MarketingSherpa Summit 2016 — At the Bellagio in Las Vegas, February 22-24

Video Marketing: How VMware’s Google Plus Hangout produced a 1,600% ROI [From MarketingSherpa]