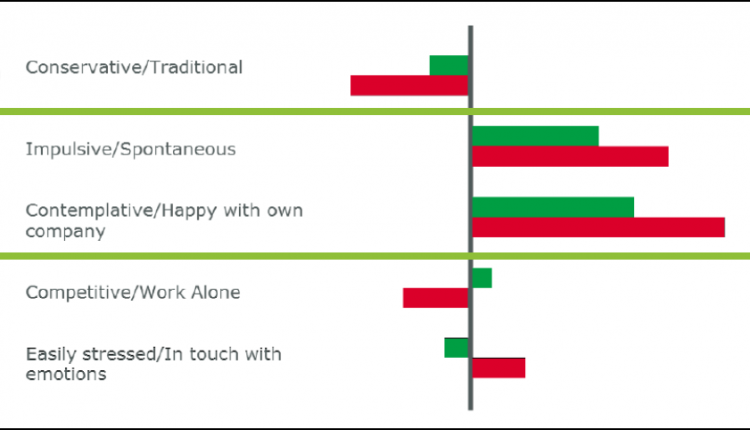 From previous posts on Big Five personality research in marketing we know that different personalities prefer different images and messages in ads. Personalizing ads based on personality can yield a high return on your marketing investment. Today let’s look at a study comparing the clickthrough rates of personality-matched Facebook ads to the benchmark clickthrough rate in the traveling category.

Sandra Matz and Vesselin Popov, researchers at the Psychometrics Centre, Cambridge University, collaborated with Grayling UK, an agency working with Hilton Worldwide, to study the effectiveness of personality-based tailored marketing campaigns for the Hilton HHonors Summer and Winter Sales.

The project consisted of several steps. First, the team used existing data from Facebook’s myPersonality app to identify personality traits of people who “liked” Hilton pages, and compared those traits to the traits of the “travelling” category audience in general.

The Hilton audience’s characteristic traits were low conservatism/traditionalism and competitiveness/preference for working alone, and high extraversion (being engaged with the outside world) and conscientiousness (organized and hard working). To understand their audience in more detail, the team distributed a link to a 50-item online personality assessment to 215 participants and gave them feedback. 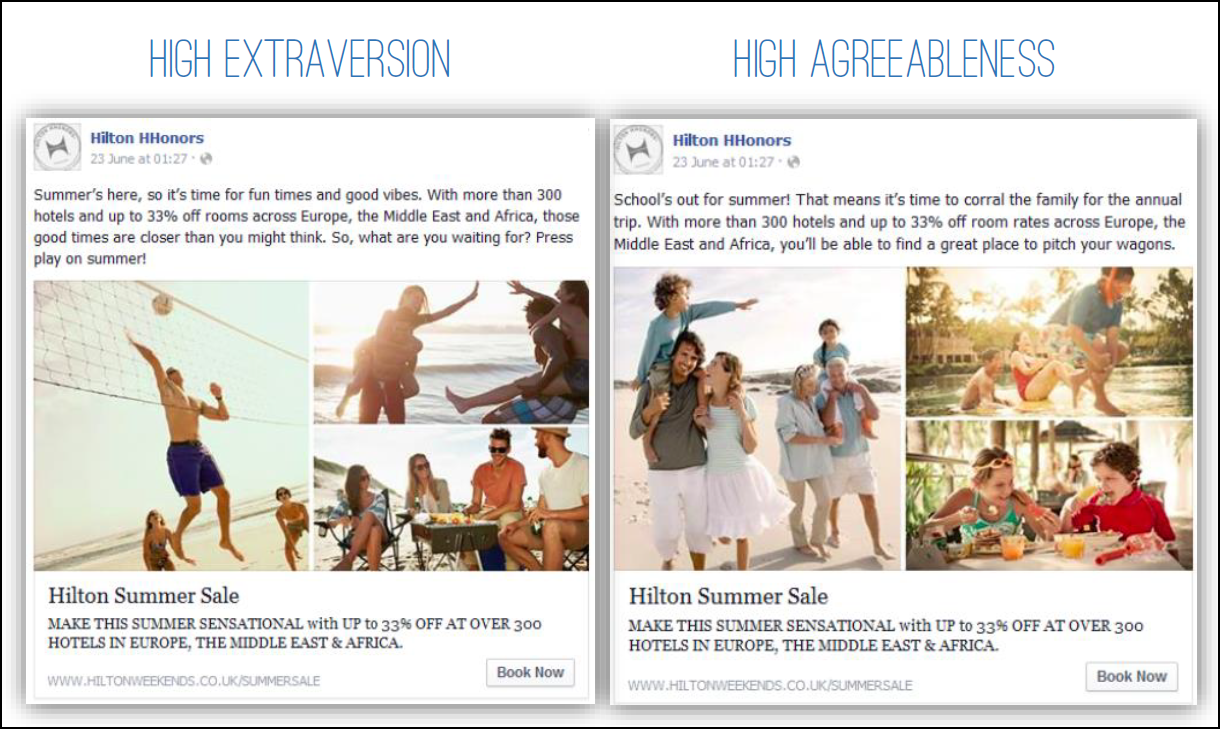 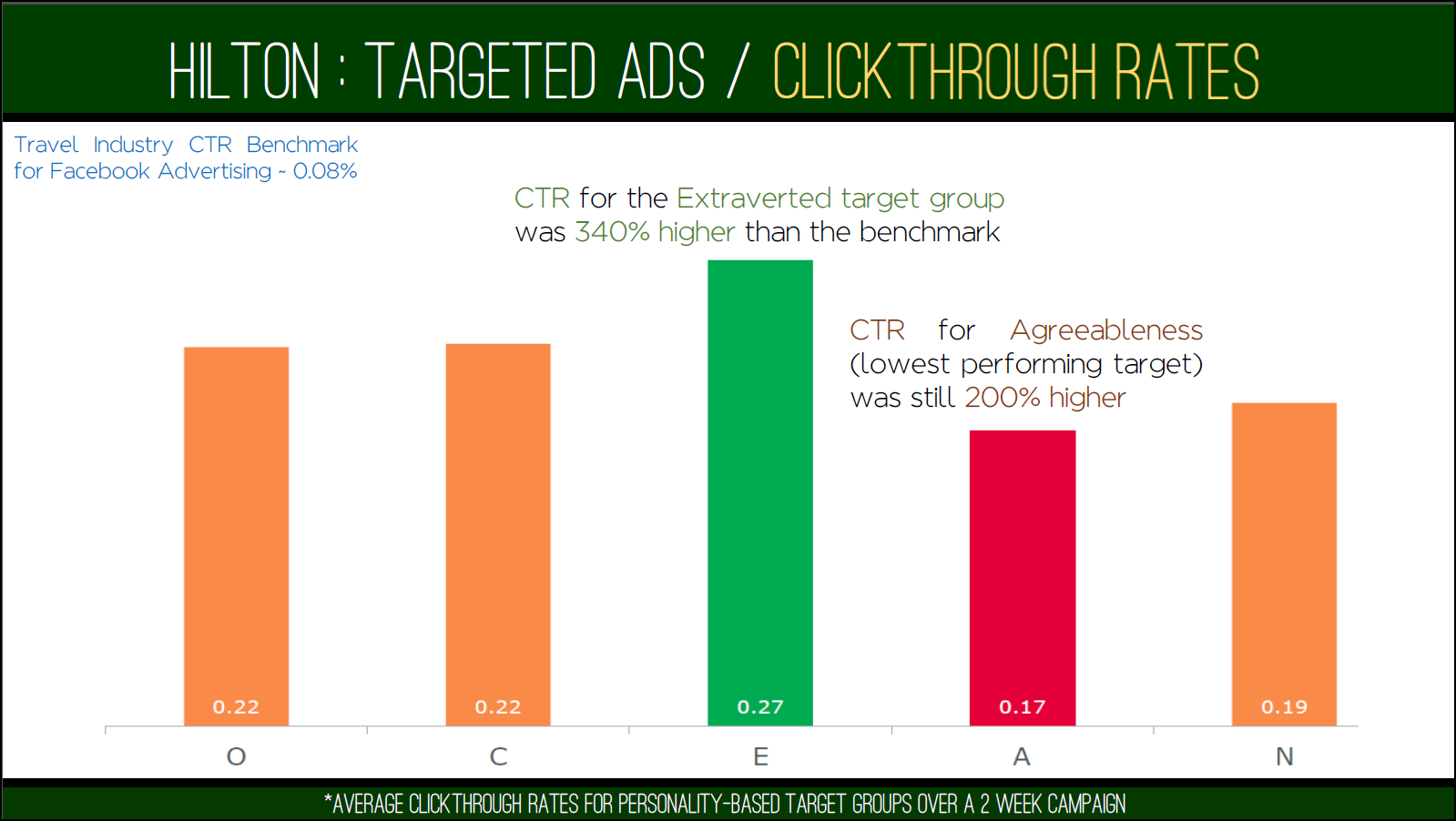 Personality-matched ads were also shared on Facebook more than three times as often — 34.32% as compared to 9.22% benchmark.

Usually companies selling hotel rooms would target people who like Facebook pages related to traveling. However, if you are targeting non-obvious keywords, the ads are generally cheaper. “You can still reach the same profile of audience, but suddenly you’re not competing with every other hotel room provider that are all doing the same thing. Because Facebook and Google’s ad buying systems work like an auction (the more people bidding on the same keyword the higher the CPC), not using obvious keywords but reaching the same profile of audience turns out to be about 7 times more efficient,” Popov said.

Based on the success of the personality-matched campaigns Hilton developed a Holiday Matchmaker app that predicts users’ personality traits from their Facebook “likes.” The app provides customers feedback on 11 traveler types, along with ideal holiday destinations and travel companions. The app invites users to share their “types” and ideal destinations on social media. 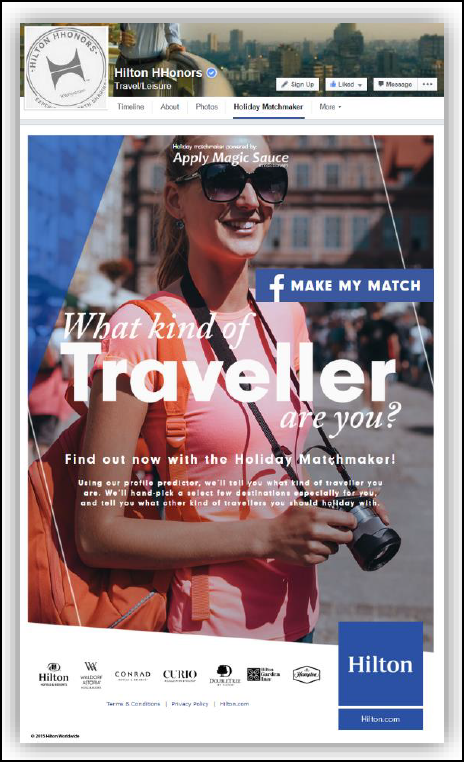 To wrap up, personality-matched Facebook ads can outperform general category targeted ads. Personality also provides non-obvious and more cost-effective keywords for marketers who are buying digital ads. Marketers can incorporate assessments in their communications with customers, but also use their customers’ digital footprint to gauge their personality traits.

Personality Matters: How one company doubled its ROI by customizing ads based on personality

The Psychometrics Centre, University of Cambridge

Ecommerce Marketing Research: To be truly successful, you must step out of the ecommerce bubble