How we tested the impact of press releases on website traffic and inbound links, and found that effective PR can deliver an ROI superior to PPC advertising 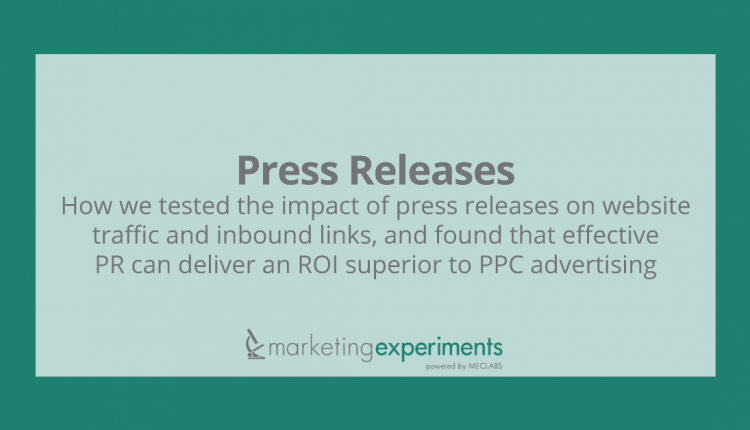 We recently released the audio recording of our clinic on this topic. You can listen to a recording of this clinic here:
Press Releases

It’s tempting to think that press releases are “old media” and have no part to play in the modern world of digital communications.

Our testing has shown that press releases can create significant spikes in site traffic, and generate hundreds or even thousands of back links. Those involved with link-building strategies will certainly appreciate the value those new links can deliver.

However, we also learned that when you sit down and do the math, the cost per click of a PR campaign can be less than driving traffic through the purchase of keywords in a pay-per-click campaign.

In this brief we will show you four things:

Over the past six months, we issued seven press releases for our own site, MarketingExperiments.com. These press releases covered a variety of new developments:

The table below shows the costs of these releases, their distribution, and the direct, measurable results of each:

What You Need To UNDERSTAND: In seven press releases issued over a six-month period, we were able to generate more than 3000 direct visitors and six interviews, which went on to create additional traffic.

The press releases were distributed in two ways: (1) through online wire services and (2) manually to editors by our PR firm. (*1)

Not all of these press releases performed equally well, but we were able to generate both direct traffic and additional exposure in the press, which in turn generated additional traffic.

Notably, both PR6 and PR7 focused on potential lost revenue, which is an important element in the minds of online marketers. Each of these releases generated two press interviews.

KEY POINT: An effective press release strategy will focus on topics that are timely, personal, and specifically relevant to your target audience. This will help to maximize distribution and impact.

Most notably, we were pleased to discover that the number of incoming links increased significantly as we continued to promote our site via press releases:

What You Need To UNDERSTAND: Over six months, our press release campaign helped to create a five-fold increase in the number of incoming links to our site. (*2)

KEY POINT: An ongoing press release effort is one of the most effective means of creating incoming links to your site. Not only will these links bring in additional traffic directly, they will also help your link popularity in natural search engines that adjust ranking based on that criterion.

In additional testing, we focused on more personal stories:

Here are the results of those two press releases:

What You Need To UNDERSTAND: PR9 created a direct influx of over 2,200 unique visitors and five interviews. This was by far our best-performing press release in this round of testing. However, it was manually sent to many more editors than the other releases.

PR9 performed very well because it was timely, regionally focused, and highly relevant for its target audience. Most importantly, it focused on a story that appealed to audiences on a personal level.

KEY POINT: Media outlets generally prefer to deliver news that has personal impact. If your press releases can help them accomplish that task, they have a greater chance of being noticed by busy editors. Focus on press releases that are local, personal, timely, and specific.

The purpose of PR9 was to generate donations of housing for the Hurricane Katrina relief effort. This map graphic illustrates the locations of the donors nationwide.

The story was picked up by a television station in Philadelphia and aired on the 10 PM news on Friday, September 2.In this close-up map, you can see the concentration of donors in and around Philadelphia.

KEY POINT: What makes a press release a success can often come from an unlikely place. Often, just one media outlet picking up your story will create a positive ROI.

The short- and long-term advantages of PR vs. PPC:

When we looked at the PR results for both our own company, MarketingExperiments.com, and our non-profit partner, i58projects.com, we took a moment to compare the short-term ROI with the money we had spent on Pay per Click advertising.

Here are the figures, comparing the historical PPC costs with our press release campaigns:

It is astonishing to see that even in the short term, the cost per visit through PR was significantly lower than through our PPC campaigns. These PR numbers include only the directly measurable traffic.

The above chart takes into consideration only the optimized pay-per-click campaign for both sites. When you look at certain keywords related to the targeted subject matter of the press releases, it becomes even clearer:

What You Need To UNDERSTAND: For these press releases, we were able to attract traffic for a much lower CPC than through the relevant targeted keywords in Google. The caveat in footnote (*3) is still important to keep in mind.

There are a few points to take into consideration here.

First, while PR bursts and longer-term campaigns can drive significant traffic to certain pages on your site with a very good ROI, PPC still has its place. For instance, PPC can be used for more precise targets, delivering keyword searches to very specific landing pages.

However, the superior short-term ROI on press releases is just the beginning of the story.

In short, our tests lead us to believe that PR is extraordinarily under-utilized in the online industry, and that companies should conduct their own tests internally to determine both the short-term and longer-term benefits of PR.

As we have observed, not all press releases are created equal. Some will achieve much broader distribution than others, attract more visitors, and generate more inbound links.

To maximize the distribution, impact, and ultimate ROI of your press releases, keep the following points in mind:

The Literature Review at the end of this report lists press release distribution services, media databases, and other resources to help you get the most our of your PR efforts.

An ongoing press release effort can create a direct influx of traffic, favorable publicity through interviews and other news coverage, and a boost in incoming links, which in turn contributes to greater link popularity and higher natural search results. By focusing on the most relevant, personal, and timely stories about your company, you will achieve the greatest possible return on your PR investment.

(*1) The paid wire service we used was Business Wire

You can find additional links and resources in the Literature Review at the end of this report.

In addition, our PR firm helped in the preparation and distribution of many of these press releases: Politis Communications

(*3) It is important to note that additional costs were incurred through the use of a PR firm to help write and distribute the press releases. However, we have estimated that these costs are similar to those involved with the labor of setting up and optimizing a PPC campaign. Therefore, the comparison is a valid one.

As part of our research on this topic, we have prepared a review of the best Internet resources on this topic.