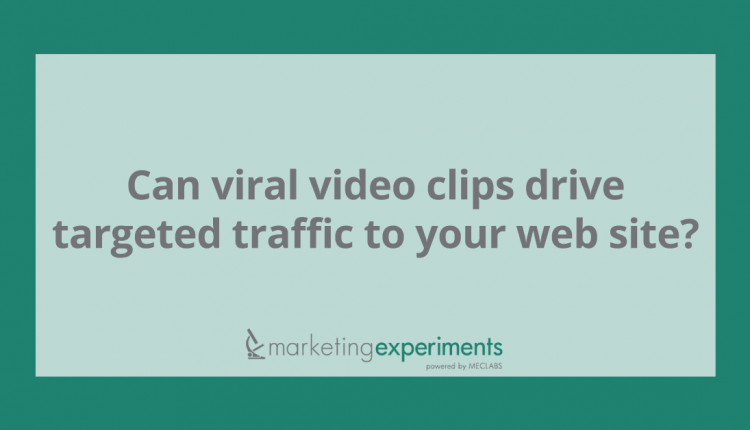 Tens of millions of people watch these short videos, but how effective are they at driving qualified traffic to web sites?

Can Viral Videos Drive Targeted Traffic To Your Web Site?

There are millions of short video clips on the web, produced both by professionals and amateurs.

The amateurs publish their video clips for fun and notoriety, and the professionals produce and publish them in order to drive traffic to their web sites and sell more of their products or services.

Tens of millions of people watch these short videos, but how effective are they at driving qualified traffic to web sites?

The question, for many marketers, is how to take advantage of the video opportunity for the sake of their own marketing objectives and goals.

Using YouTube and Google Video we published a series of short videos, measured the number of times they were viewed, how many clickthoughs were generated, and how many site visitors converted to subscribers.

These are just the first set of results form a large scale project we are undertaking on this topic.

But these preliminary results do give a clear sense of the potential of video clips as a means to generate new customers and subscribers.

BACKGROUND: THE GROWTH AND DEVELOPMENT OF THE INTERNET COMMUNITY

For a long time people were trying to use the internet to do things that it simply was not capable of doing. Often, in the past, we have been able to optimize processes and improve conversion by reducing the complexity of the multimedia on the site.

When Flash first came out it was exciting and every designer wanted to use it. However, many times we were able to increase conversion by cutting out the use of video and audio.

Look at the evolution from where the internet first started. It started out with everything being free.  Natural search was first starting. You could actually go to the top of a natural search engine within a day or two of launching a site and start getting traffic almost immediately.

Since then the world has changed. Paid search has emerged and Natural Search has become extremely competitive. ROI has become much more important. People stopped offering everything for free, and marketers’ expectations about potential performance rose dramatically as they recognized the potential.

Now, we are in an era where search – paid search and natural search – is a commodity.  If you are not doing it well, you must improve quickly. ROI is driving the marketing. Nothing is free.  The war on SPAM is waged daily, and the legislative environment is changing daily.

Viral marketing is now one of the most powerful ways to market online. This is what the Internet was designed for, multimedia as mainstream. This has come about primarily because of the adoption of broadband.

Depending on the report about 50% of the houses in the U.S. have broadband, and that trend is continuing across the world. 80% to 90% of businesses are now using broadband.

What you need to understand: Recreational Internet Surfing has recently overtaken television as the largest recreational activity.

KEY POINT: By the end of 2006 it is estimated that more than 6 billion people will be using the internet. It took more than 50 years for television to get to this point.

Most readers have probably heard about the YouTube acquisition. After one year in business, they were acquired for $1.65 billion by Google. Starting from zero about a year ago, YouTube is now getting more traffic than MySpace, CNN.com, and Ebay. This is a testament to the growth of video and its viral nature.

We created a total of 28 videos ranging in length from 15 seconds to 8 minutes. Each video had a 3-5 second promotion at the end of it, specifying a URL which indicated that there was a website that may be interesting or relevant to the viewer.

Videos where placed on YouTube and Google Video, and where possible, a link was provided on the same page as the video, which drove traffic back to the main website.

Each of the videos was in one of these categories:

All of the video clips we shot were deliberately “amateurish” in their approach and production.

We purchased off-the-shelf video-editing software for a PC, started filming, and edited all of the videos ourselves.  The total estimated investment for this project (all 28 videos) was $9,600.

Our intention was not to test the performance of the glossy, high-production videos you might expect from an advertising agency. What we wanted to understand the viral potential of videos of the kind created by individuals on the web.

To give you a sense of what we did, here are two of the videos.

Both videos were humorous, and more importantly, neither one was promotional. There was no sales message, no product placement, no clever segue to a sales pitch on a landing page.

We ran the videos during August and September of this year and tracked the number of times each video was viewed, in addition to clickthroughs to the sites and subscription sign-ups.

Here are the results, using combined figures from all 28 videos:

What you need to understand: Although the video clips had no promotional message or content, 1.49% of viewers went on to become newsletter subscribers. In Just 60 Days, our videos were viewed over 324,000 times at no cost to us.

KEY POINT: With no additional work or money spent, we are projected to generate 382,444 views for October, which is more than we generated in the previous 2 months combined.

:: To create a context for these video clip results, we built a comparison chart to see how much it would cost to achieve the same results using Pay Per Click advertising.

These figures are based on the same number of views, the same clickthrough rates and the same conversion to subscribers. With regard to cost per click, we assumed a mid-range price of 30 cents.

What you need to understand: Had we used Pay Per Click advertising to acquire the same number of new subscribers, based on a cost-per-click of 30 cents, it would have cost us over $20 per subscriber.

VIDEO AS A COMPONENT OF YOUR SOCIAL MEDIA OPTIMIZATION STRATEGY

Entertaining or provocative videos can quickly become viral, being shared by tens or even hundreds of thousands of viewers, most of them connected through online social networks.

However, it is important to understand the nature of the environment in which video clips are most widely distributed and shared.

If you simply add a video clip to your site or blog, and to YouTube, you will be taking advantage of only a small fraction of the opportunity that exists.

In the same way that you optimize your web sites and blogs for the major search engines like Google, Yahoo! and MSN, you also have to optimize the presentation of your video clips in order to be found through searches within social network community sites.

This process is called Social Media Optimization, or SMO.

Social Media Optimization is the process by which you optimize your online presence to be more visible through searches within online communities and community web sites.

It’s like SEO for social network sites. It’s how you make your sites, videos, podcasts, RSS feeds and blog entries more visible and searchable to tens of millions of people who are connected through sites like MySpace, YouTube, Del.icious, Technorati, Reddit, Facebook and dozens of others.

The essence of SMO is to increase the chances of your video – or any other portable, sharable content – being distributed more widely and being found more quickly though community search engines.

This is important when producing short videos, because it is within and across these networked community sites that video clips are most likely to be distributed and shared.

In other words, to maximize the chances of your video going viral, you have to optimize it for sharing across social network communities.

As an example, if you post a video clip to your blog, you will want to increase the chances of the video being widely distributed.

The most basic step to take is to add a line of links to relevant social network sites. Here is an example of a typical list of links at the end of an optimized blog entry:

These links allows people to quickly add your blog entry to the social network or community site or sites to which they belong.

Once the post has been added by one person, it will be available to every other member of that community through the site’s search function.

While some of these sites, like del.icious, Yahoo! and furl include categories that cover almost any topic and subject you can think of, other communities are more focused.

YouTube is clearly focused on short videos. In common with other social network sites, it has a number of features that enable members to vote for, rate, share and distribute the videos they like best.

This voting and rating process is an integral part of almost all social network community sites.

As a result, content rises to the surface through a “democratic” process, whereby the combined opinions of community members determine which content gets the greatest exposure.

In other words, social media search is driven not by algorithms, but by popular vote.

It is essential to understand this when you create your own videos. Your videos need to be compelling, entertaining or at least different in order to rise above the noise and be voted into “visibility”.

6 Essential Tips to maximize the Viral Potential of Your Videos