Direct vs. Indirect Creative: Which ad is better? 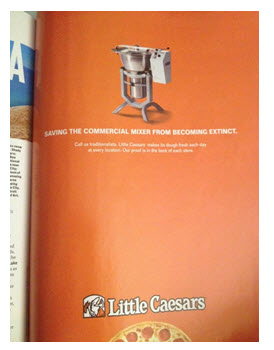 Most people spend their lives trying to avoid ads. Not me. This may make me a complete marketing nerd, but I actually enjoy reading ads. I have for some time now. I love studying the different approaches of persuasive communication. I love attempting to uncover the underlying value propositions under each ad. I love just seeing how other marketers are attempting to communicate value to their potential customers.

Recently, I was on a Delta flight to San Diego, and I began to sift through the different ads in the Delta Sky Magazine. The first ad that caught my attention was an ad from Little Caesars. Now, I am no Little Caesars expert by any means, but its brand real estate in my brain up to that point was simply this: We do cheap pizza.

This ad was trying to combat that perception in a decently creative way.

The ad was mostly made up of white space (or perhaps orange space). The first positive thing about this ad was that it stood out from the other pages. It also had one bold image in the middle — an industrial mixer. A single line of ALL CAPS text centered beneath the mixer simply stated, “Saving the commercial mixer from becoming extinct.”

Now, there are very few elements to this ad. Its creative is simple and elegant. Its creative also takes an indirect communication approach. David Ogilvy (widely hailed as “The Father of Advertising”) would be proud.

What are they trying to say by putting a big picture of a commercial mixer? What do you think the implied value proposition is? What is the message underneath the creative approach?

OK, so now flip a few pages, and you’re hit by a completely different ad that takes a more direct communication approach. It is an ad for a watch — G-SHOCK. I personally have no familiarity with the brand, but I am familiar with similar watch ads. 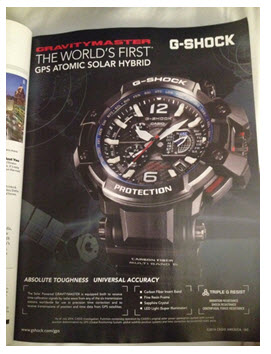 Like the first ad, there is one main image. However, the image is of the actual watch. It is not, like the previous ad, an image of something responsible for the building of the watch. This is already more “in your face.”

The image is also significantly larger; there is very little open space.

There is a larger headline that states, “The world’s first GPS atomic solar hybrid,” and then below,  in small print, the ad presents all of the details associated with both the “toughness” and the “accuracy” of the watch itself.

Again, what are they trying to say? What is the implied value proposition? What is the message underneath this direct approach?

Now, here’s my question: Which ad is better? We have two completely different approaches. One is direct, in your face, not nuanced and has very little “creativity.”  The other is indirect, simple, elegant and very creative.

So, which approach is better?

Many of us have our preferences. The inner-Ogilvy in me would esteem Little Caesars’ elegance. The inner-Rosser Reeves in me would celebrate the directness of the G-SHOCK.

However, the answer to this question does not lie in the actual creative itself. It is found in our ability to see underneath the creative. It transcends the two approaches. It touches what we call the “value proposition.” This is also what Rosser Reeves called the Unique Selling Proposition (U.S.P.) or what David Ogilvy called the Basic Selling Proposition (B.S.P.). It is that fundamental, essential proposition you are trying to imply with your creative.

Seeing through the creative

Forget the approach (direct vs. indirect) for a moment. What is it that the Little Caesars ad is implying about its pizza? What is Little Caesars’ value proposition?

Ultimately, they are trying to say something along the lines of, “This pizza is fresh and good.”

Now, look at the other ad, and decide what the G-SHOCK is trying to say about its watch. What is this watch’s value proposition?

Ultimately, G-SHOCK is trying to state that its watch is tough and accurate.

Putting creative approaches aside and focusing on the value proposition, which of these ads is more powerful now?

At the end of the day, it is less about “how” they are saying it and more about “what” they are saying. This “what” will be the true force behind the success (or failure) of either of these two ads. As marketers, we have to be as good at the “what” as we are at the “how.”  We have to learn to transcend the approach and find the essence that has the greatest customer force.

And for what it’s worth, the G-SHOCK ad is 10 times better.

Value Proposition for Startups: 3 questions every startup must have the courage to answer [More from the blogs]

Value Proposition: 4 questions every marketer should ask about value prop [More from the blogs]

Marketing Optimization: 4 steps to discovering your value proposition and boosting conversions [More from the blogs]

The Power of the Properly Sequenced Subject Line

The Five Major Factors to Look for When Evaluating a Website