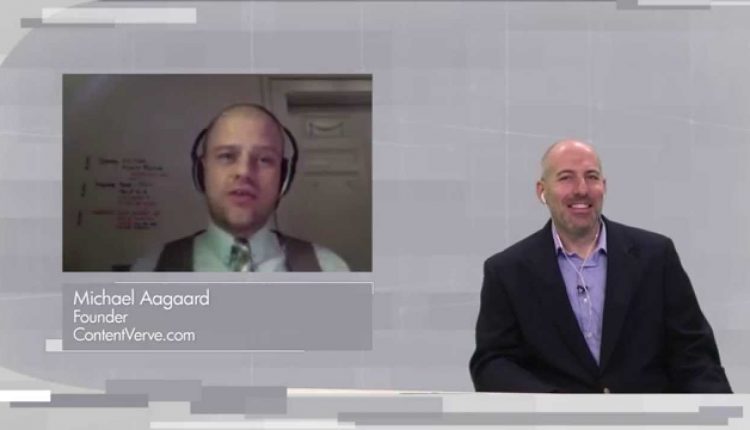 At Web Optimization Summit 2014 in New York City, Michael Aagaard, Founder, ContentVerve.com, will present, “How, When and Why Minor Changes Have a Major Impact on Conversions,” based on four years of research and dozens of case studies.

To provide you with a few quick test ideas, we reached across the miles to Copenhagen, Denmark, and interviewed Michael from our studios here in Jacksonville, Fla.

In this video interview, Michael discussed:

Below is a full transcript of our interview if you would prefer to read instead of watch or listen.

Daniel Burstein: Thanks for joining us today. We want to give you, leading up to Web Optimization Summit, a few quick tips, small changes you can make on your websites, landing pages, digital marketing, right now, over the next week, over the next month to make significant changes. I’m talking about small changes that make big results.

I’m thinking about a guy we call the “button man” because he’s done so much testing on call-to-action buttons. That’s Michael Aagaard. He is a conversion copywriter from Copenhagen, Denmark. He is the founder of ContentVerve.com. He’ll be speaking at Web Optimization Summit. He’s joining us today to share a few tips.

Michael Aagaard: Well, I think kind of, my story anyways – I started my career in online marketing at an agency, and I was an SEO copywriter. So, we spent all this time generating traffic to websites, but in many cases, all the clients got was more traffic. They didn’t really get more sales or more conversions.

At some point, it kind of just dawned upon me, like, “Maybe we can do something on the website that will actually get people to do what we want them to do.”

Because traffic without conversions is pretty much a waste of time and money.

So, that led me to start reading all these books about marketing and stuff, and most of them give you rules.

Always do this. Always do that. Never have more than eight words in your headline. Always write 700 words and use as many verbs as possible, or use no verbs at all. I thought, “Cool. I got the 10 rules. Now, I can sell anything to anyone online.”

The only problem was that it didn’t work. So, I kind of initially went through this, “Yeah.” You know, kind of, “I understand everything.”

So, I understood nothing. Then, I started watching the MarketingExperiments videos. They really got me inspired to start … also, these guys who weren’t like preaching, “These are the rules. We know everything,” they’re saying, “We don’t know everything, but we can help you find out what’s right in your conversion scenario,” as I like to call it.

So, that kind of got me going. Then, initially, I got the opportunity at the office to do a few landing page tests.

The funny thing was that the most successful test we did that I was involved with was just a simple button test, where we changed the copy of the button, and got a huge lift. That was a bigger lift combined than all the creative versions we’d done on landing pages before.

That was where I was like, “Wow. There’s got to be something here.” Then, I went, obviously, I went to Optimization Summit in Atlanta and it blew my mind.

The main thing here is that traffic without conversions doesn’t matter.

So, that’s one of the main reasons why you want to focus on getting people to do what you want them to do on the website.

Daniel: Yeah. You make a great point. I was reading – Webtrends put out some data yesterday. Marketers spend $92 on driving traffic for every dollar they spent on conversion.

We don’t want traffic. We want conversion. We want final results. So, Michael, you’re a guy who’s attended many MarketingSherpa Summits before. You’ve spoken at them. You’re now going to come to Web Optimization Summit in New York. You’re going to be a featured speaker.

I know you were testing out some of this yesterday. You were a keynote in Copenhagen at a conversion optimization event. Tell me, what was one of the tests that you shared that had the biggest response with that audience that people listening today can learn from?

Michael: Well, I mean, I always use tons of case studies in my presentations. Even for a 30-minute session, I have about 17 or 20 case studies in there. Because every time I make a point, I want to have a real example that I’ve been involved with to kind of underline how this would work in the real world.

So, a recent test that just kind of concluded that really got a huge reaction, I opened with it yesterday, was a simple, simple test that I performed for a client on a pop-up. What we were testing was a 30-second delay versus at exit. You know at exit is when the software can kind of see that you’re displaying behavior that kind of shows the software that you’re going to leave the website. That’s what triggers the pop-up.

The one with the 30-second delay actually got 142% more conversion sign-ups for the newsletter. So, if we’re talking about small investment, all we had to do for that one was just go to the tool and go. So, that’s a huge lift.

Then, I asked the crowd, and said, “How many of you would like 142% increase in email sign-ups?” Everybody raises their hand.

So, I think, for me anyway, one of the things I’ve spent a lot of time optimizing or looking for is the small opportunities where a small investment that we can do without too much research, without too much investment. We can do this quickly, and we can get a huge lift. OK? Now, I know that there are a lot of fluke tests out there with bad data and stuff, where people conclude the test way too soon and small changes, big lifts and stuff. So, that’s not what I’m talking about. I’m talking about serious research here and trying to identify when, why, and how do small changes impact conversion. That’s pretty much what I’m going to be talking about, yeah, at the Summit here.

Daniel: Yeah. Another place where small changes can really impact conversion is on those call-to-action buttons. Like, I joke, you’re the button man.

But, when we were planning this session, I’m so amazed. I’m here in Jacksonville, Fla. Michael’s there in Copenhagen. We’re planning this session. He showed me all these cool tests on the computer. It’s just so cool he can share it over the miles. But, one of the best ones was just one change to one word, you made in the button, really made a big difference. Right?

Michael: Yeah. So, one of the things I think that’s important to understand with going for small changes and big lifts is that it’s wrong to assume that any little thing you’re going to change is going to have an impact.

So, you move the logo one pixel to the left. That will have a huge impact. No, no. I mean, you have to have a solid hypothesis backing it up. So, what I’ve been able to identify is that when you’re dealing with mission-critical elements, elements the user has to go through in order to get from one end of the funnel to another, those elements, small tweaks have huge impacts because those are some of the few elements that people are actually going to pay attention to.

Buttons, like you say, great example. There’s a tendency that buttons are just kind of just part of the design. But actually, they play a crucial role in conversion because they tie every single step of the funnel together. Every time you ask anyone to do anything online, they have to go through a call-to-action to be able to do it.

So, small changes, especially to the copy, have huge impact. So, for example, the color and the position of the call-to-action is very important.

It’s going to tell you kind of like where is the action. How am I going to get to the next step? But, after you’ve located the button, I’ve performed so many tests where I can prove that people actually read the copy in there, and to get them to just that last nudge to make them make the right decision. Copy has huge impact.

The test you were talking about now, I performed this on several different websites and in multiple languages, and it works every time.

So, just changing, for example, if you have a button that says “Order now,” for example, or “Order whatever.” If you change that to “Get,” I’ve seen significant lifts over and over again.

You say, “That’s just one word. Why does that have such an impact?”

Another thing is that “Order” is very business-centric.

What do we want people to do on this page? We want them to order.

What should we write in the button? Oh. We’ll write “Order.”

So, you have to kind of think. Change the perspective and say, “Is that really the best thing to tell our potential customers? That we want them to order? Or should we focus on what we’re giving them, what they can get?”

So, yeah. I could go on. I find stuff like that fascinating.

Daniel: Yeah. So, don’t focus what we, as a company, what our objectives are. Focus on what customers want. Stop ordering them around. No matter what language you’re using, tell them what they can get. Well, Michael, thanks for your time. I look forward to seeing you in New York City.

Michael: I look forward to seeing you guys as well.

Daniel: And thank you guys for watching.

Call-to-Action Button Copy: How to reduce clickthrough rate by 26% [More from the blogs]

Call-to-Action Button Copy: How to reduce clickthrough rate by 26%

Web Optimization: How to get your customers to say heck yes!