Copywriting: See immediate lifts by applying these 5 principles to your headlines 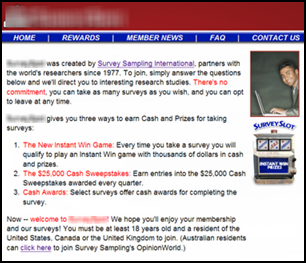 Creating a more effective headline is one of the easiest ways to make a significant lift in any experiment — it doesn’t require teams of developers or the latest technology to make happen.

What it does take, however, is applying the five key principles of effective headlines.

MECLABS, the parent company of MarketingExperiments, determined these key principles based on more than 15 years of testing and research. These actionable insights were revealed during the most recent MarketingExperiments Web clinic, which featured 12 experiments reviewing 34 total headlines. Watch it here.

In this blog, we’ll illustrate these five principles by looking at one of the tests featured in the clinic.

Background: A survey company offering to pay its members to take surveys.

Goal: To increase the amount of people taking surveys.

Research Question: Which panelist registration page will have a higher conversion rate?

Test Design: Which page/process will generate the most conversions?

The Control had no headline.

The Treatment included a headline. In fact, the page had so much traffic that it was possible to test 10 headlines. The screenshot below illustrates where the headline landed on the page. 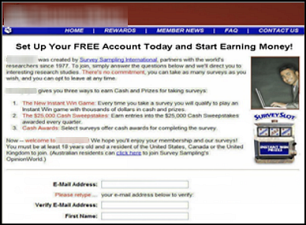 These were the headlines that were tested: 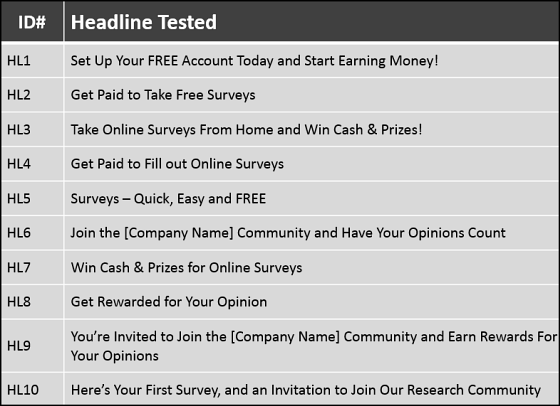 These were the results, ranking from highest response rate to lowest:

Principle #1: Effective headlines focus first on what the customer gets

Shift your thinking from what you want the customer to do for you and, instead, focus on what you can do for the customer. “Get” is a mindset that achieves this. Connect to what the customer wants first and foremost. Consider the winning headline above. It tells customers that they’re going to “Get Paid to Take Free Surveys.” In fact, three of the top four headlines begin with the word “get,” demonstrating the importance of focusing on what you will provide to the customer.

Don’t ask customers to do too much too soon. Think about what they want to do right now. In the case of the winning headline, that’s getting paid to take free surveys. They want to make money but they don’t want to join, set up an account or take a survey, as indicated in the worst-performing headlines. Headlines should never lead by asking the customer to do work.

You want to lead with the information that will be most compelling to the customer. The winning headline put “get paid” at the start, whereas the losing headline had “win cash & prizes” at the end. Clearly, most customers won’t read through five to eight words to find out what’s in it for them. Each word of a headline is essentially a micro-yes that must convince the customer to continue on to the next step in your sales funnel.


Cleverness will reduce conversions if the headline doesn’t clearly connect to what your customers care about most. Consider the headlines “Set Up Your FREE Account Today and Start Earning Money” or “Join the [Company Name] Community and Have Your Opinions Count.”  In both cases, customers have no idea that they are going to be asked to take surveys. Conversely, the winning treatment (“Get Paid to Take Free Surveys”) clearly states the premise of the landing page.

Principle #5: Give your headlines weight

Don’t lose your headline in graphic design. Make sure it can be seen instantly and easily on the page. You can’t miss the headline on the Treatment. However, below is a case where the headline got lost in copy and graphics. 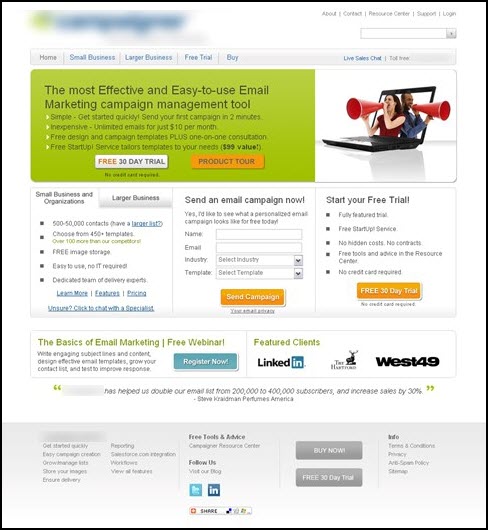 Making the headline stand out increased conversion by 58%. 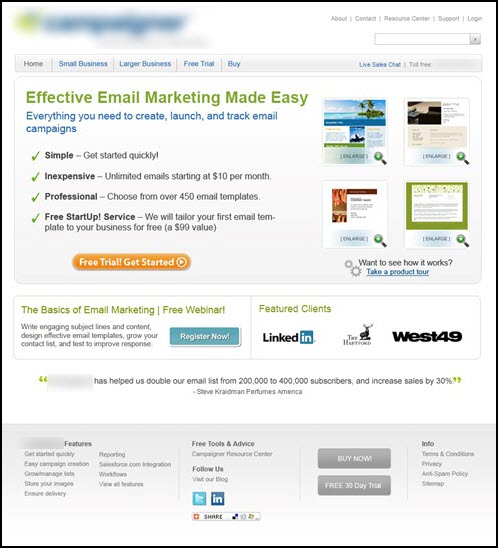 Put your headlines to the test with these principles — it’s an easy and inexpensive opportunity to drive immediate results.

Get the first look at consumer purchase preference data — Take 15 minutes to complete the 2015 MarketingSherpa Practices Survey, and get a free pre-release copy of the August 2015 MarketingSherpa Consumer Purchase Preference Survey plus a chance to win a free, three-day ticket to MarketingSherpa Summit 2016 in Las Vegas OR an iPad Air 2. The deadline is September 28.

The A-Z of A/B Testing

How to Write Headlines That Convert