Banner Blindness: Why your marketing messages are hiding in plain sight 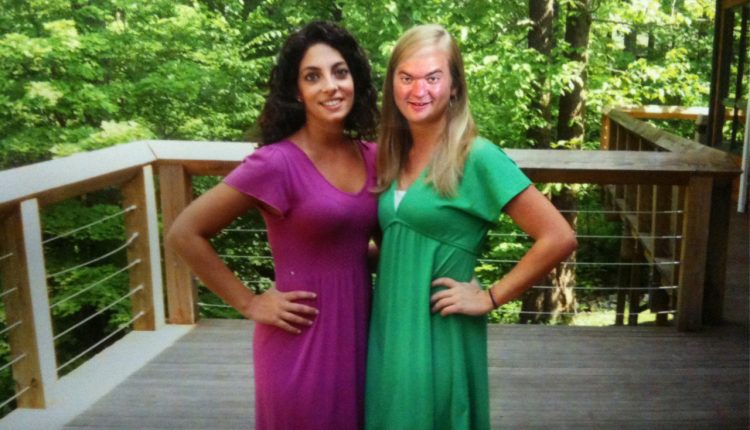 Your customers may be flat out ignoring your latest news, offers and ads. Don’t blame them. It’s human nature.

Take a quick look at your surroundings — your cubicle, your office, your solarium — wherever you’re reading this. How much do you notice what’s around you? I mean…really notice?

Not as much as you think you do, I’m guessing. Take a recent experiment run here in the labs. And by “experiment” I mean “practical joke run by our Associate Director of Optimization, Adam Lapp.”

Adam Photoshopped a picture of one of our Research Analysts, Ashley, posing with a friend. It’s the picture in this blog post. Perhaps it looks normal at first glance, but if you take a closer look, you can see that the blonde woman on the right looks a little, well, masculine.

That’s because Adam Photoshopped the face of a male Research Analyst over the face of Ashley’s female friend. He then replaced the photo she had hanging in her cubicle with this photo.

And, Ashley didn’t even notice her friend’s metamorphosis until someone pointed it out to her. Even though it was right in front of her face all day. Why?People don’t notice subtle changes in familiar environments

Now I don’t want to throw Ashley under the bus. I fully admit, I’m no better (and neither are you…or our customers).

For example, we recently moved the official offices of MarketingSherpa from Rhode Island to right here in Jacksonville Beach, Florida. I’ve been very cognizant of the need to look for where changes of that address need to be made on our many Web properties.

But I didn’t notice that the change wasn’t made on the MarketingSherpa Twitter page – even though I look at it at least five times a day.

However, when I was interviewing Ryan Amirault, Digital Marketing Manager, Whole Foods Market, for his case study at Email Summit 2012, he instantly noticed the location and started talking about Rhode Island.

So while being new to, say, a landing page, makes the customer more likely to notice the discreet marketing message, even novelty may not help …

What we’re really talking about when we say “banner blindness” is a phenomenon scientists refer to as “inattentional blindness” or “selective attention.” The typical person is overloaded with visual stimuli and inputs of all sorts, making it simply impossible to focus on everything. So, people often overlook things that are right in front of their face.

Now, I may have already primed you to see the gorilla in the above video. However, when Daniel Simons of the University of Illinois at Urbana-Champaign, and Christopher Chabris of Harvard University ran this test, they found that, in most test subject groups, 50% of the subjects did not report seeing the gorilla.

How can you get your customers to see your ads?

So if a gorilla doesn’t work, you might be thinking, “I need to go one step further. From now on, every ad I run will have a tap dancing chimpanzee with a neon tracksuit.”

Easy, big fella. You need not become a carnival barker to grab your audience’s attention. All I want to draw your attention to is the fact that what is obvious to you (since you likely eat, sleep, and breathe your marketing message) is not always readily apparent to your audience. And don’t take for granted that your message got across just because you put it at the top of your homepage.

Here are a few common sense thoughts to keep in mind as you seek to overcome banner blindness:

–Contrast: The more an object can stick out, due to bright colors, crazy patterns, or motion, the more people are likely to notice it. (Keep in mind, if you are running a pay-per-click ad, you want more than attention and curiosity clicks … you want quality clicks.)

Here is an example from the MarketingSherpa site. There is a clear contrast between the ad and its surroundings, thanks to the different color, the bright visual, and even in how “Reserve Your Seat” interrupts the “Limited seating still available” rectangle (please note, it comes out a little brighter on the screen than it does on the screen capture below).

–A Multichannel Approach: Don’t think that just placing a message at the top of your homepage, smack dab in the middle (especially in a similar font as its surroundings), is enough to get your message across. I’ve made this mistake myself before. “What do you mean we didn’t tell people? It’s right there at the top of the homepage.”Most people won’t even see it. Especially if they visit your site often.

That doesn’t mean you can’t put your message there, it just means to reach your potential customers in as many ways as possible with the message – email, social media, dedicated landing pages, offline communications – and not take for granted that the message was received just by placing it on your homepage.

–Get in the Middle: There are certain areas of webpages that most people usually relegate to background noise – the top and bottom headers, the right and left columns. When placing an ad, or putting information on your own site, try to get right into the middle of the content.

If you aren’t able to, try to make sure your information is at least at a natural stopping point for the content — for example, just to the right of or below the end of a blog post or article.

–Break out of the Box: Many marketers place information in a box on their homepages or landing pages that doesn’t necessarily need to be in that box … and therefore their audience is overlooking it.

From a headline on a homepage that is placed in a box (and therefore ignored) to testimonials that look like text-based ads, this mistake is all too common. When you’re on your own website, make sure you are not inadvertently making important information look like a banner ad that will be — you guessed it — totally overlooked by your visitors.

The Ultimate Click: How to get what you pay for with pay-per-click advertising

Banner Blindness: Optimize your online display advertising to stick out (or blend in)

Online Advertising: The 3 obstacles you must overcome to create an effective banner ad

Banner Design Tested: How a 35% decrease in clicks caused an 88% increase in conversion