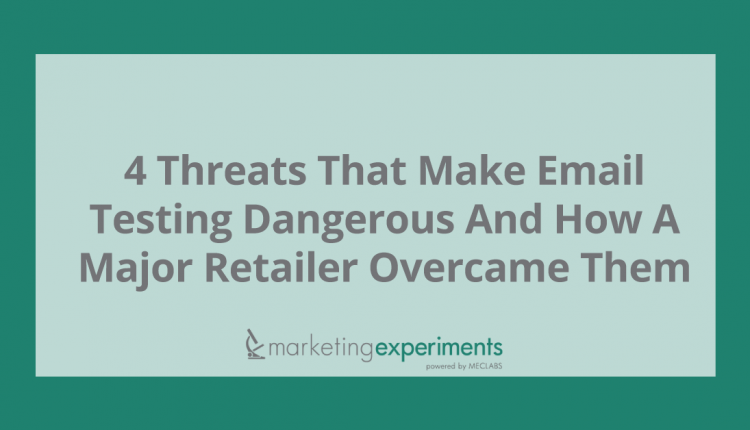 To test emails, you just send out two versions of the same email. The one with the most opens is the best one, right?

“There are way too many validity threats that can affect outcomes,” explained Matthew Hertzman, Senior Research Manager, MECLABS.

A validity threat is anything that can cause researchers to draw a wrong conclusion. Conducting marketing tests without taking them into account can easily result in costly marketing mistakes.

In fact, it’s far more dangerous than not testing at all.

“Those who neglect to test know the risk they’re taking and market their changes cautiously and with healthy trepidation,” explains Flint McGlaughlin, Managing Director and CEO, MECLABS, in his Online Testing Course. “Those who conduct invalid tests are blind to the risk they take and make their changes boldly and with an unhealthy sense of confidence.”

These are the validity threats that are most likely to impact marketing tests:

A look at a real-world example

Matthew had to mitigate these validity threats when he was charged with testing a series of holiday-themed emails for a major retailer. This meant he and his team had to complete 20 email tests in a month that were sent to a list of more than 2 million. The short time frame would quickly diminish the chances of history and selection effects and would make it easier to identify instrumentation and sampling distortion effects.

The goal of tests was to find out:

“It was just incredible to see so many tests launched so quickly,” says Matthew.

He admitted it took detailed planning, strategizing and communication. Matthew’s team made sure the players who approve communication — including legal — were on board with everything, including:

To achieve buy-in, they began the process several weeks in advance, and the planning paid off. Thanks to this intense effort, the retailer learned that:

“Test results indicated that prospects likely know the holidays are coming up fast, so we can replace the urgency message with something that would resonate better,” explains Hannah Morrell, Research Analyst, MECLABS, who worked on the project with Matthew.

Most importantly, because of Matthew’s efforts to ensure the highest validity by launching so many tests in a short time frame, the retailer can confidently use these insights to inform future holiday campaigns.

Determining if a Data Sample is Statistically Valid [MarketingSherpa slideshow]

Why Subtle Changes in Button Copy Can Significantly Influence Clicks