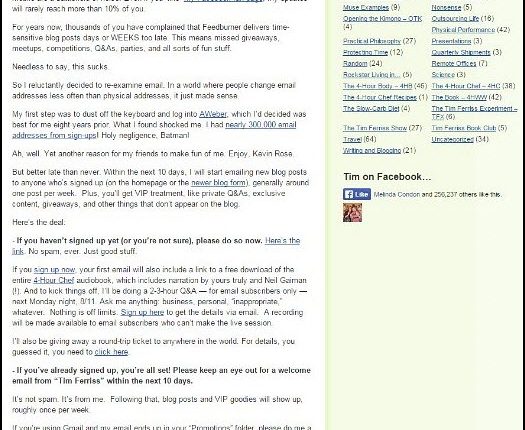 How does one end up with a list of 300k inactive users?

Between his bestselling 4-Hour book series, popular 4-Hour Workweek blog and investing in and advising top tech companies such as Uber and Twitter, it’s difficult to deny that Tim Ferriss knows a thing or two about optimization. Collecting nearly 300k email subscribers since he first set up his blog for The 4-Hour Workweek in 2007, Tim hadn’t sent a single email. However, he revived the email program one test at a time over the past year, and we interviewed him to discuss his recent successes.

The first question: with his ability to continually try new things and drive results, why would Tim let such fertile testing ground go to waste?

“I assume that since I have a lot of emails, I don’t want more emails. Therefore I’m not going to email my audience,” Tim said.

He explained that he later decided his reason to email people didn’t have to be building up his list, or putting them into a sales funnel.

“I realized the tools of my trade that I used to reach my audience like Twitter, Facebook, the blog, etc. were being crowded out in various ways. In other words, whereas I could hit 80% of my fanbase very easily two years ago, it’s very difficult now to alert them to the fact that I have a new blog post. Readers were missing things that were time sensitive. So I really viewed email as, in a world where email addresses change less frequently than physical mailing addresses, just a great way to simply ensure my fans get the content they want to get from me. That’s it,” he said.

Here I have captured some key steps and extra insights Tim and his team took to avoid disaster when emailing and engaging a list of this magnitude for the first time.

Even if you’re an experienced email marketer, it’s not every day you send out to email a list of 300k subscribers for the first time. And, unfortunately, just emailing the list, including an unsubscribe link and hoping for the best won’t cut it with a list of this size.

For this part of the process, Tim and his team took several actions:

First, they turned to a third-party list cleaning and validation service to remove any bogus email addresses likely to cause issues. These services ensure each email address actually exists, is accepting emails and checks for damaging (but deliverable) addresses including spam traps, honeypots, frequent spam complainers and disposable domains, among other issues.

Second, the team chose an email send provider (ESP), knowing they lacked a mailing reputation with the ISPs.  Because of this knowledge, the team knew going with an experienced ESP ensured that the team could utilize the ESP’s sending domain for DKIM authentication for maximum deliverability. (DKIM is an email validation system designed to detect and ultimately protect against spoofing, and is often used as a component in spam filtering.)

In addition, the ESP handled hard bounces not eliminated by the cleaning, complaints from users and email deferrals (emails that are temporarily refused by a receiving server).

Thirdly, the team segmented the emails by year of acquisition and throttled their sends to ensure they could identify problems with the data early and avoid blacklisting and other deliverability issues.

Even with a freshly cleaned list and respected ESP in place, there’s no guarantee an email send will result in engaged users, a concern Tim was very cognizant of and vehemently working to resolve.

“When I realized that I was sitting on several hundred thousand emails, I realized a few things simultaneously. Number one, before I emailed anyone in my audience, I wanted to take their temperature and see how they would respond to it, which I did with a blog post. The blog post, and the comments in that blog post, put everyone on alert that I was considering emailing and was likely to email. Number two, it allowed them to vent any concerns [and] frustrations and provide suggestions,” he said.

In addition to the blog post, Tim’s team launched a “pre warm-up” campaign — essentially a highly personalized email from Tim explaining to subscribers that they were going to receive ongoing emails from Tim. 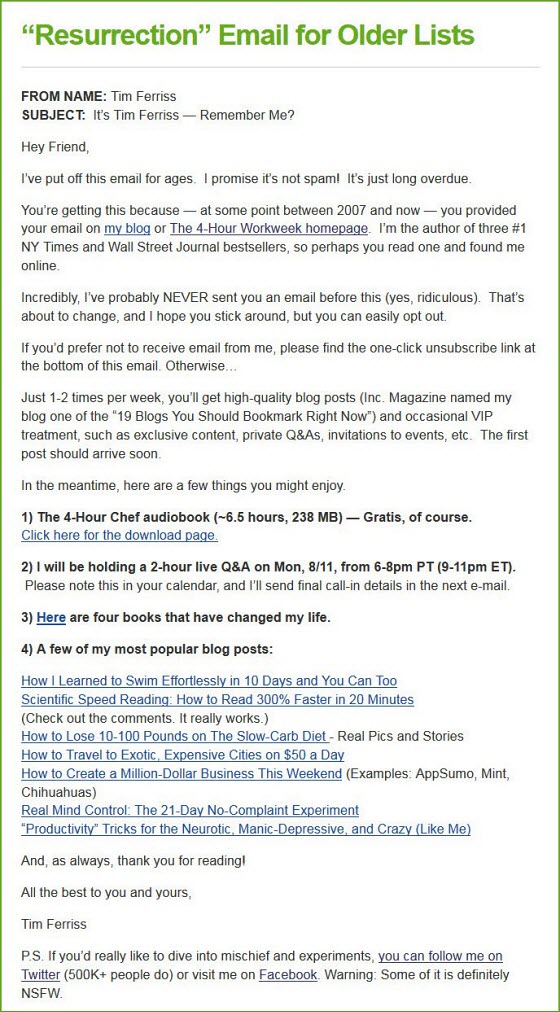 The email explained how they opted in (many of the older subscribers likely forgot), what would be sent to them, what type of content to expect, frequency of sends and the privacy policy. It also enabled users to opt out from future mailings if so desired. Finally, a pre-header with a clear reminder statement and unsubscribe button rounded out the warm-up email.

There were seven main elements that were tested on Tim’s site that got progressively more aggressive and complex.

The team suspected that the header would get the most subscriptions, but wanted to test how the sidebar or footer would affect conversion rates on the same form.

For this element the team wanted to answer the question: How does a black and white form compare to a color form?

They found that the color form performed moderately better than the black and white form.

3. Variance on call-to-action button on form

Here the team wanted to answer: How important is the call-to-action? Does it make a difference if it says “Sign Up For Free” versus “Get Free Stuff”?

The winning variant was “Go VIP” with a conversion rate of 1.01% versus the worst performing “Get Free Stuff” at 0.78%.

4. Use of downloadable assets as incentive

The team wanted to answer: What kinds of incentives do we need to give people to give us their email address? How much could we boost the conversion rate by if we gave away an e-book for instance?

They found that the audiobook conversion bumped the conversion rate up from 0.75% on the control to 0.87%.

5. Using Tim’s face on the copy

The team knew that using photographs of people has a great effect on making testimonials more believable and in improving conversion rates — but how does it affect newsletter subscriptions?

They found that using Tim’s smiling face helped increase conversions from 0.72% on the Control to 0.92%.

The team wanted to answer: How does a pop-up form affect conversion rates? How about a slide up form when a user scrolls down? How about delaying the length of time before a pop-up appears?

The slide-in form from the bottom of the page gave a conversion rate of 1.26% while a pop-up, even on a slow three minute timer, gave a 1.26% conversion rate.

While they knew they didn’t want to have this as the permanent call-to-action, they also wanted to know what the “sweet spot” was for displaying a pop-up.

It turns out — the sooner it appears, the better the conversion rate:

The result of all this hard work? Initial sends showed 50%+ open rates on newer data and ~24% open rates on older data. Outstanding numbers, especially considering some of the subscribers had been on the list since 2007.

In addition, Tim continues to test his email subject lines, frequency and time of sends, email capture forms and messaging, which, to date, has resulted in nearly 60,000 additional subscribers added since the initial campaign.

To read more details about Tim’s successful campaign and learn what the team is testing to continue to see nearly 1,000 new subscribers daily, check out our case study.

From 300 to 5,000 Twitter Followers in 3 Weeks: An interview with a growth hacker

Value Proposition: How a local business doubled its space in 9 months