The Compounding Effect of Micro-Gains 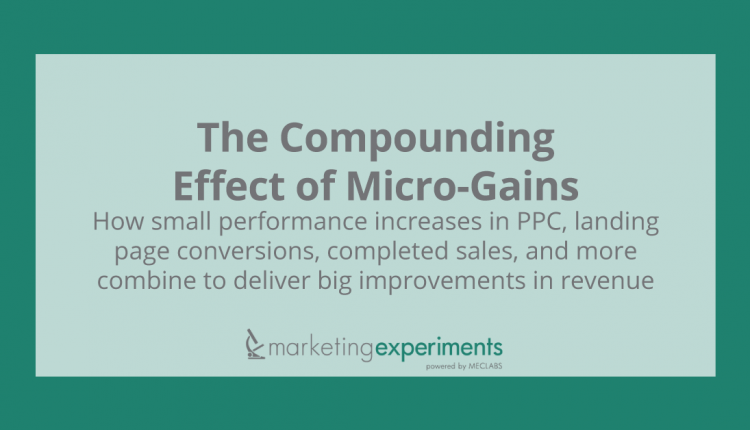 Does a 5% increase in click-through from a PPC ad sound disappointing?

But what if you also achieved the same 5% improvement in landing page conversion rates, completed sales, increased lifetime value, and other improvements to your site and marketing efforts?

When you compound multiple “Micro-Gains” along the entire promotional and sales pathway, the final increase in revenues can be significant.

Our tests show us that to understand the true impact of broad optimization campaigns, it is best to judge your efforts based on the total, compounded increase – not on what may be small, individual increases at various steps along the way.

This may sound obvious, but all too often we rush to judge the performance of individual elements within the optimization process.

It may be that you sometimes feel disappointed and dismiss the benefits of a small increase in, say, offer page conversion rates, because you are looking at that figure in isolation.

In this brief we will look at the power of compounded increases along the entire pathway. We’ll also show you how to identify those areas where apparently small improvements leverage surprising increases in revenue.

We’ve chosen a series of isolated micro-tests to illustrate the power of compounded gains. These are not our most effective test results, but they are good examples of the kinds of Micro-Gains all of us can achieve.

In our first experiment, we tested the effectiveness of three pieces of pay-per-click (PPC) ad copy. We tested two new ad headlines against an already-proven headline that generated a 10.9% click-through rate (CTR).

What You Need to UNDERSTAND: While Test Copy 1 failed to register an improvement, Test Copy 2 achieved a CTR increase of 6.42%.

On its own, a 6.42% increase in traffic may not sound like much. But taken together with the subsequent optimization efforts, it can prove to be quite substantial.

For more on PPC ad copy, see our previous report on that topic:

In our second test, we made a small improvement to the order form by including the ability to accept an additional payment form (online check). The gains from this minor improvement were small but noteworthy:

KEY POINT: By making even the smallest improvements to your marketing efforts, you can realize important Micro-Gains, which when combined with other small improvements can lead to significant compounded improvements in traffic and conversion. As we will see below, these can translate into large profit gains.

The following reports will be helpful when optimizing your order forms:

The Power of Compounded Gains:

The two tests above, taken on their own, are not that impressive. They illustrate small improvements that you can make to your website and marketing campaigns. However, there is no need to stop with just these two improvements. Through testing, you should be able to realize Micro-Gains in most of the following areas:

Using just these nine improvements, and using a conservative estimate of just a 5% increase in each area, we can see the true potential of compounded incremental gains.

Here is the effect of those compounded gains:

What You Need to UNDERSTAND: These nine Micro-Gains produced an additional $48,312 in monthly profit.

Note: These numbers were generated with our spreadsheet tool, which you can download below.

KEY POINT: The “Change in Net Profit” column shows which of these “5% Micro-Gains” actually had the most impact on profit. Therefore, you may want to implement those changes first.

An important distinction in the table above is the monthly change in net profit measured against the total compounded improvement.

First, notice the impact on actual profit of just a 5% increase in each area. In all areas but two, the actual profit increased by much more than 5%. This illustrates the power of leverage, which is using the given marketing improvement in such a way that the positive outcome is magnified.

What You Need to UNDERSTAND: By compounding the effects of these incremental, sequential marketing improvements, the total profit gain is effectively double that of what it would be taking the tests separately.

In other words, leveraging and compounding together has twice the power of leveraging alone. And this is just one example with conservative 5% gains in each area. Even in our micro-tests above, which were specifically chosen because they were rather modest improvements, a single testing effort improved some of these testing areas by 6.42% and 8.50%.

To illustrate the power of Micro-Gains, we chose tests with single-digit improvements over those that were tremendous successes in and of themselves. But imagine the power of compounding gains of 50% or more.

Or better yet: Rather than imagine the potential, download our spreadsheet tool, which was the same tool we used to generate the profit analysis above. It allows you to plug in your own numbers and analyze the total increase in profit.

These nine improvements have been selected as examples of simple Micro-Gains that can be made to your site and marketing efforts, each of which can have a large impact on overall revenue when compounded.

Clearly, your optimization efforts shouldn’t stop with these suggestions. Our library of previous experiments covers dozens of techniques that can improve your marketing.

Just keep in mind how sequential Micro-Gains can deliver astonishing increases in revenue through the power of leveraging and compounding.