Insights from 900 U.S. News Consumers: Millennials’ and older generations’ attitudes toward the news 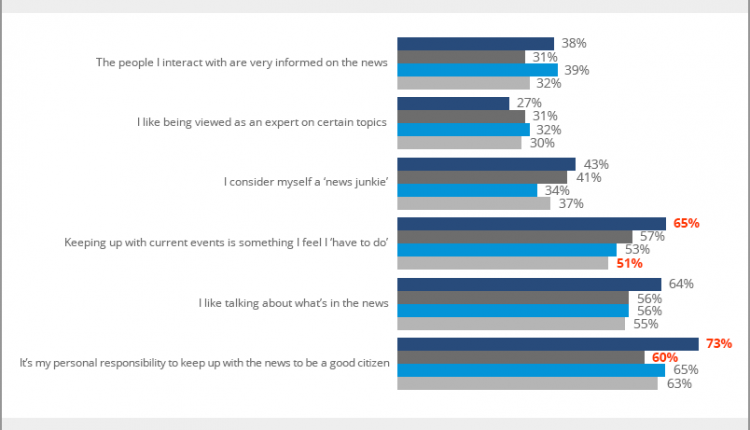 A recent study by MECLABS Institute, the parent research organization of MarketingExperiments, found that age is one of the factors that predicts the likelihood of consumers paying for a subscription to news sources. Older people were more likely to pay for subscriptions. The researchers tried to understand whether Millennials’ and older generations’ attitudes toward the news are different. How do Millennials see the value that news provides? A breakdown of attitudes toward the news by age shows Millennials’ views about keeping up with the news as less of a civic duty than older people, who feel responsible to follow the news and enjoy discussing it more than Millennials.

From November 24-30, 2015, MECLABS conducted an online survey with a YouGov panel of 900 U.S. news consumers aged 25 and older, with household incomes of $40,000 or higher and who spent three hours or more in a typical week consuming news in print or digitally.

The researchers asked, “Thinking about the news, to what degree do you agree or disagree with each statement below?” on a scale of 1 to 6 where 1 = “strongly disagree” and 6 = “strongly agree.” 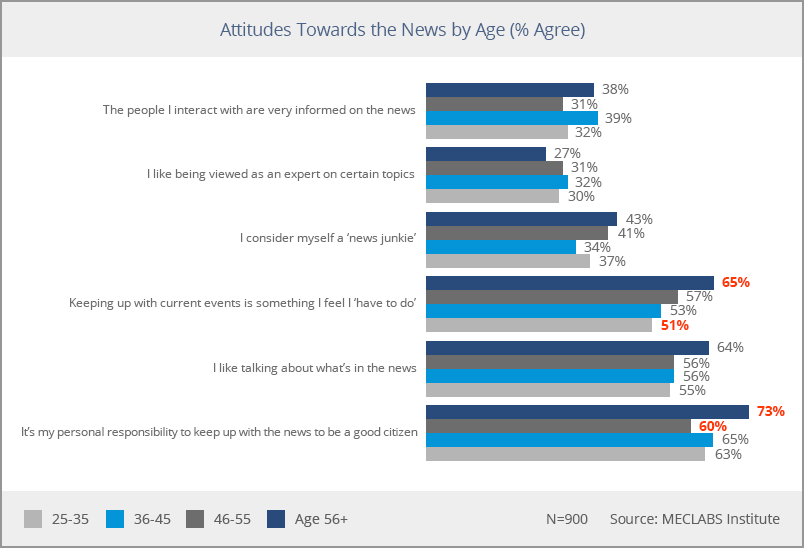 While all age groups were quite similar in their preferences for being viewed as experts on certain news topics, there were bigger differences between Millennials and older generations in their perceived responsibility to follow news.

While 73% of people 56 and older agreed that it’s their personal responsibility to keep up with the news to be a good citizen, a lesser proportion of 46-55 year olds (60%) and 25-35 year old Millennials (63%) agreed with that statement.

Similarly, while 65% of people 56 and older agreed that keeping up with current events is something they feel they “have to do,” just over half of 25- to 35-year-old Millennials (51%) felt that way.

Interestingly, besides feeling more obligated to keep up with the news as their civic duty, people 56 and older (64%) also reported liking to talk about what’s happening in the news more than any of the younger age groups.

Does this mean Millennials are less interested in being involved in the democratic process? Not so.

In 2013, Pew Research Center reported in its civic engagement study that younger adults are just as likely as older adults to be engaged in many political activities, and are much more likely to be politically active on social networking sites.

In 2015, American Press Institute reported a study in collaboration with the Associated Press-NORC Center for Public Affairs Research which found that Millennials are being drawn into news that they might otherwise have ignored because peers are recommending and contextualizing it on social networks. The study also found that once Millennials are exposed to news, nearly 9 in 10 usually see diverse opinions, and three-quarters of those investigate opinions different than their own.

While engaging Millennials with news based on a sense of obligation might be hard, making news social could be a viable engagement strategy for news providers.

How Millennials Get News: Inside the habits of America’s first digital generation (from The American Press Institute)

Appeal: Does your value proposition actually make customers say, “I want this product or offer”?