Email Marketing: 4 data points to help you build the case for a bigger budget in 2016 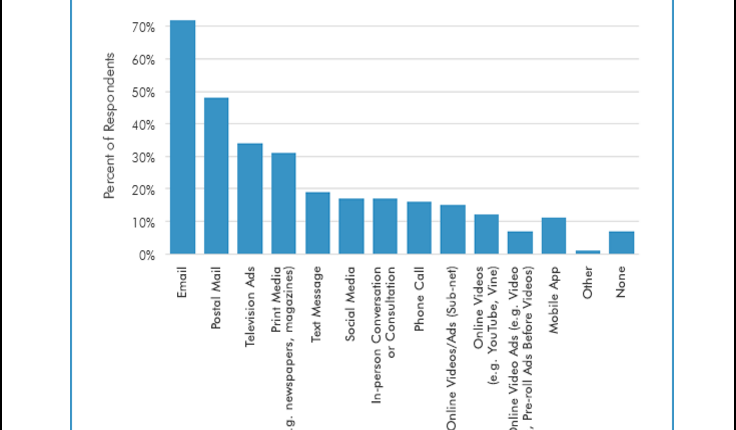 As we get towards the end of the year, it’s time for B2C marketers to make last-minute tweaks to drive holiday sales and B2B marketers to get those last few, really high-quality leads that will hopefully close in fiscal year 2015.

But don’t overlook another important date that is coming up on the calendar as well — January 1, 2016. The day that 2016 budgets kick in for many marketers.

To help you win the email marketing budget you need to be successful in 2016, here are a few key data points that you can drop into your proposal or presentation.

According to a 2015 study of 2,057 American consumers by MarketingSherpa (MarketingExperiments’ sister publishing brand), customers want email. When asked “In which of the following ways, if any, would you prefer companies to communicate with you?,” 72% of consumers chose email, by far the most popular response. Postal mail was a distant second with 48% of respondents. 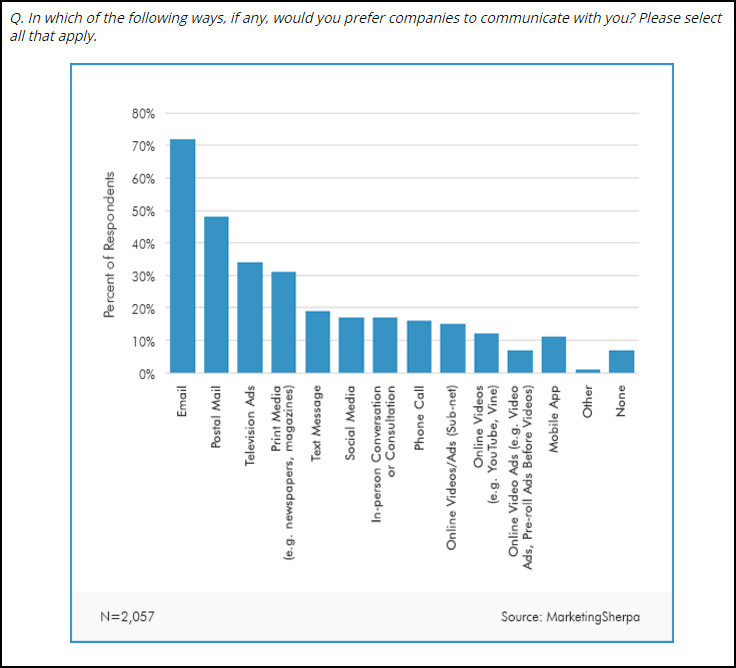 Not only do customers want email, but this was true for all age groups we surveyed. Email was the most frequent response in every age group (for Americans 65 and older, postal mail tied email for the top spot). 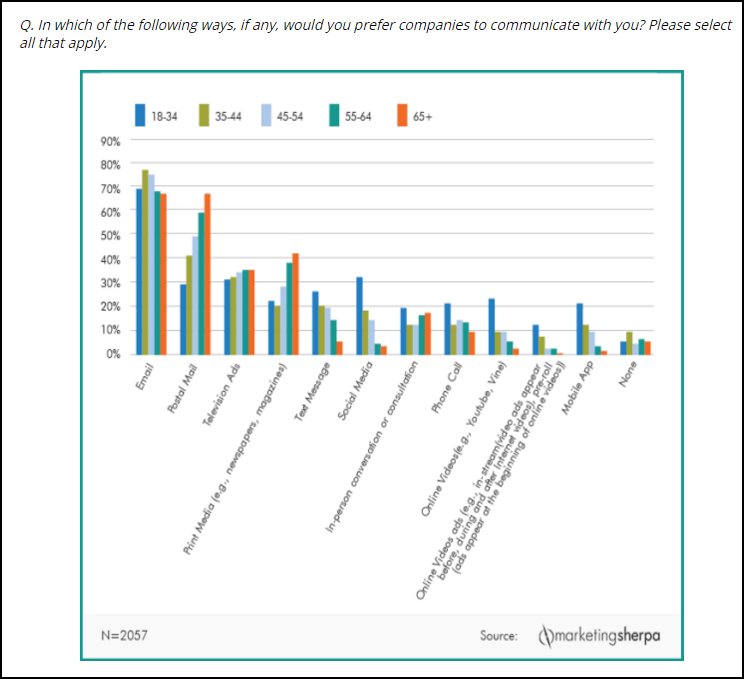 At the MarketingSherpa Media Center at &THEN, the DMA’s annual event, I asked Thorin McGee, Editor-in-Chief, Target Marketing magazine, about the state of email marketing.

I am presenting one of the sessions during Target Marketing’s 2015 All About eMail Virtual Conference & Expo about the strategic formula for email conversion success and using testing to optimize your email program (more on testing in Data Point #4), so I knew Thorin would have some key takeaways about email marketing at the ready for an off-the-cuff conversation.

The most interesting piece of data Thorin shared in our conversation came from Target Marketing’s Media Usage Survey 2015.

“We do our own media usage survey every year. And I’ve written it personally for the last five years. And every year I’ve done it, email has been the most used marketing channel among our readers,” Thorin said.

“It’s also been the one seeing the highest level of spending growth. Which is a little strange when you think about it because for five consecutive years, how could the same channel, one, be used by 96% of our readers, and two, still be seeing higher budgets year over year?”

Near universal usage of email marketing paired with ever-increasing budgets? To see why I think this is possible, let’s take a look at Data Point #3.

Marketers continue to win more budget for email marketing because it has a pretty impressive ROI.

The exact number varies based on where you look. The DMA has one of the most-quoted numbers I’ve seen about email marketing ROI — that it generated $43.52 for every dollar invested. But this well-known number is from 2009.

In 2011, the DMA found email bringing in $40.56 for every dollar invested. And more recently marketing consultant Jordie van Rijn found email (in the UK) to have an average ROI of $38 for every dollar spent, up from $24.93 in 2013, as reported in the National Client Email Report for the DMA UK and Email Hub.

Vendors have their own data as well. In 2014, Experian reported that the average ROI for a dollar invested in email was $44.25. Perhaps the most ambitious number I’ve seen is from Epsilon, which claimed, back in 2009, the DMA’s number was actually low if you take into consideration “the action that email drives offline and directly to Web sites, email marketing’s ROI is probably closer to $130 — about three times the DMA’s estimate.”

While these numbers can be a starting point when making the case for your budget, don’t focus too closely on them. In fact, the sagest data I’ve seen about email ROI comes with a very vague data point. Chad White, Research Director, Litmus, said,

“The Direct Marketing Association says email marketing returns $43 for every dollar invested in it. While that’s incredibly impressive, it’s even more impressive when you realize that figure averages in a lot of low-performing programs. I know brands that are generating email marketing ROIs of $80, which they’re achieving with aggressive, smart spending on technology and services.”

To provide some context and help you be an informed consumer of information, Chad does work for an email vendor, so “aggressive, smart spending on technology and services” is to his company’s benefit.

That said, Chad does have an excellent point that is backed up by MarketingSherpa data. Email marketing was only producing an ROI for 60% of marketers when we last asked about this topic in December 2012. 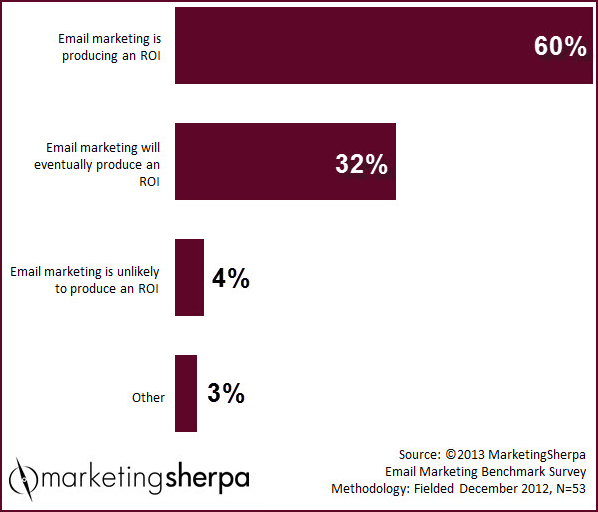 This means, that in all of those average email marketing ROI numbers above, the “have nots” are pulling down the even better numbers generated by the “haves.”

It’s not enough to just send email to potential customers. As they increasingly demand more personal, more relevant, more helpful emails that provide a true utility in their life, it will likely take “aggressive, smart spending on technology and services” to be in the upper echelon of email marketing ROI. So remember Chad’s point when setting, and making the case, for your own budget.

You need the technology to be able to get relevant messages to the right people, and then services (or internal resources) to actually create the messages to send through that technology.

“Email, no matter what you’re trying to do, is content. People are getting it in the same sense that they used to get newspapers. And you need to make an interesting newspaper in order for them to keep opening it and for you to have a chance to sell them something,” Thorin told me.

Data Point #4: Budget for testing to improve that ROI

Of course, it takes more than technology and content to achieve ROI from email marketing. As any loyal reader of the MarketingExperiments blog well knows, it also takes wisdom about the customer. Testing is an excellent way to gain that wisdom about your customers.

But it’s bigger than email. So the data point I’ll share about testing is not even about testing; it’s about data — 90% of the world’s data has been produced in the last two years, according to the U.S. Chamber of Commerce.

I found that data point in an article by Scott McCorkle, CEO, SalesForce Marketing Cloud, in which he says “Email is the perfect petri dish for data testing.” He also shared this example:

“With email, marketers can bring in their data and test campaigns, offers and messaging on a scientific basis. Data also allows for highly personalized emails, like those recently sent by DonorsChoose.org in a campaign to aid teachers who had never been funded. These personalized emails were sent exclusively to donors within a close ZIP code range to encourage localized giving, and they generated $450,000 from approximately 4,500 donors, or about 1.9 percent of DonorsChoose.org’s revenue for the first half of their 2015 fiscal year.”

But it’s not just about the data

When setting your budget, also consider the reason we collect all of this data — the customer.

The point of collecting all this data and testing with it is to serve a customer with relevant value. As conversion consultant Jeremy Smith said, “Manipulating your visitor into making a decision that is wrong for them is no way to build a business. Doing that is the same as making false claims or otherwise misrepresenting a product. You may get a conversion, but it will be your last from that customer.”

And according to my interview with Thorin, the truly successful email marketers follow this advice. The brands that look past an overall conversion and focus on the relationship have the most successful email programs.

“The subject line is the most important thing for me to get our media audience, our Target Marketing audience, to open an email,” Thorin said.

“When you talk to really good email marketers, though, they’re using oftentimes the same subject line over and over again because they have reached a level of customer loyalty and brand recognition that their customers, their email list subscribers, are going to open the email every day just to see what they’re doing in it. And they treasure that, and they never mark that as spam, because of that.”

Email Marketing: What travel sites can teach you about creating successful campaigns