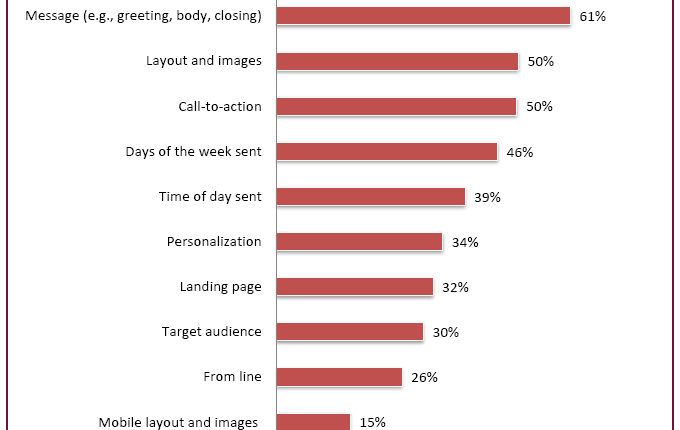 We surveyed 2,735 marketers for the 2012 Email Marketing Benchmark Report, and asked them which email marketing elements they test most often …

Q. Which of the following email campaign elements do you routinely test to optimize performance?

“I’m not surprised ‘Subject line’ testing leads the way. You have to convince a reader to open and read your email — a solid subject line gets you in that door! Once past that, then all the others come into play,” said Trevor Barnes, Senior Web Services Specialist, AMD (Advanced Micro Devices).

“Also, that’s why one of the top three CAN-SPAM guides/provisions … ‘prohibits deceptive subject lines,’” he added.

“I’m somewhat surprised at the relative positions of email specifics versus call-to-action (which I assume means ‘offer’) and target audience. Part of this may be due to how the question is worded and whether recipients view the whole email interaction as ‘test-able’ or just campaign specifics,” said Prugh Roeser, founder, LeadLogix.

While some respondents may have also assumed we meant “offer” when asking about “call-to-action,” it’s worth noting that we’ve found significant conversion rate increases from simply testing and optimizing the wording and presentation of a call-to-action without changing the offer.

Prugh went on to say, “As an email marketer who came out of a direct marketing background, the target audience has always been viewed as the most important factor in an email success, followed by the offer (call-to-action), and then by creative specifics of the email, such as subject line, copy, length, graphics, etc.”

Prugh’s remarks about testing the audience are very prescient, as we see in the following chart that matches effectiveness to the above usage data (also from the 2012 Email Marketing Benchmark Report) …

You can see from the above chart that while target audience is not the most commonly tested element, it is the most effective.

“On the other hand,” he concludes, “if both the audience and offer are right, then the email specifics can be tweaked to communicate better.”

If you would like to see your analysis and insights about a MarketingSherpa chart featured in a future blog post, sign up for Chart of the Week and share your advice based on our weekly marketing industry charts.