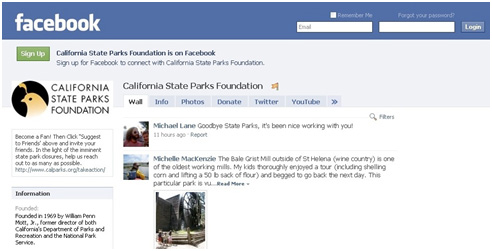 OK marketer, put yourself in these shoes (they’re more like boots actually). Your state government is facing massive budget shortfalls. Teachers are being laid off. Draconian cuts to vital public services are being announced left and right. And amid this tumult, you are the one tasked with using your marketing prowess to stave off disaster itself.

The above paragraph probably makes you feel better about your own challenges, but think for a second…given the above situation…and very little resources…what would you do?

Social media marketing for a social cause

At the end of May 2009, the California State Parks Foundation (CSPF) found itself in this very position after learning about massive cuts in state funding that threatened to close 220 California state parks.

In response, this nonprofit organization quickly launched a multichannel effort with its agency, Adams Hussey & Associates, that included direct mail, telemarketing, email, and social networking. I want to focus on that last part for this blog post. Because what amazed (and impressed) me the most was that CSPF used Facebook to shape the larger conversation about this topic.

Before I get to that, let’s look at how CSPF used Facebook. They optimized their existing Facebook fan page to promote awareness, discussion, and (hopefully) attract new activists and members. “Find us on Facebook” language and graphics were featured in every email and all over the site.

The “Friend Get a Friend” campaign launched on Tuesday, May 26, on Facebook via an update to 517 fans – “This year’s cuts are ten times as bad, so we need ten times the fans on Facebook.”  The update explained to recipients the imminent threat parks were facing and set a deadline and a goal – 5,000 fans by Friday (May 29).

The second Facebook update was sent on Monday, June 1 at 12:12 p.m. PST, stressing a 24-hour deadline and asking for fans and petition signatures. The California budget committee was scheduled to meet on June 2, so media coverage was at its height.

“The California State Parks Foundation, the lead public organization advocating keeping the parks open, had its fan base on Facebook increase from 500 to 33,000 in the past two weeks, reports Jerry Emory of the Foundation.”

Now this next part is truly impressive. With just two updates on Facebook (and in all fairness very smart cross-promotion through other channels), CSPF created a proof point for keeping the parks open, helping them meet their “promote awareness” goal.

That’s right, the Facebook campaign itself actually entered the public debate. The massive growth of this fan page caught the media’s attention and was mentioned on several TV news spots and in national news articles. They took advantage of a timely and newsworthy story (the California budget cuts were all over the news on- and offline) and created a talking point to meet their communications goals (several news oulets mentioned the Facebook growth as evidence of a grassroots swell).

As mentioned in the beginning of this post, raising awareness wasn’t their only goal. So let’s take a look at some of the other success metrics. Those two simple Facebook updates (aided by the cross-channel campaign) have helped raise several hundred thousand dollars in nonmember, one-time gifts.

In addition, CSPF more than tripled the size of its email list and acquired many new activists that are being converted to donors online and via the telephone.

Other success metrics were a little harder to meet. While California’s budget that was passed at the end of July 2009 did not close the originally proposed 220 parks, budget cuts forced nearly 150 to partially close or reduce services.

What you can learn from this case study

Nonprofit organizations are a natural fit for social media campaigns. People (who believe in your cause) want to help, often don’t want to expend much time or money, and want to look good to their friends, family, and social network. A social media campaign lies at the nexus of these three motivations. And, most importantly, it gives your fans an easy way to act.

Of course, the benefit isn’t limited to non-profit corporations. To wit, the Pepsi Refresh Project uses social media to leverage those same motivations. And this isn’t just a side project for Pepsi. They made a strategic decision to use a social media activism campaign as their main 2010 marketing push…instead of the Super Bowl. This is the first time in 23 years that Pepsi has not advertising during the Super Bowl.

So what can you learn from CSPF? When creating a social media campaign, keep a few important principles in mind:

I found this case study while perusing an early draft of an upcoming book from MarketingSherpa. To read the entire case study, along with ten other case studies from leading companies and 27 real-world examples of what works, order your copy of the soon-to-be released Social Marketing ROAD Map Handbook: A method for mapping an effective social media strategy. If you do so by May 28th, you’ll save $100 and get a free bonus gift.

I want to thank Lead Author Sergio Balegno for letting me take an early look at his research, even though he was still editing it as I poked around. And full disclosure: While Sergio and I are not related, MarketingExperiments and MarketingSherpa are sister companies.

Facebook and Omniture: A welcome step in social media measurement