Getting Significant Improvements Even When You Can’t Complete Your Tests

We have all probably designed a test Webpage or offer email that we expected to dramatically outperform the control and been stunned when performance is poor or the results come back inconclusive.

What can you do to get significant improvements or learn in those situations where you actually cannot complete your test or where you have a validity issue—particularly a validity issue connected to the size of your sample?

When the differences in conversion between the control and the experimental treatments are so small that the test results don’t validate, is all that time and energy a total loss?

In this clinic, we will use induction to scrutinize recent research findings to determine when it is possible to draw valid and valuable conclusions from tests that are not statistically valid.

Editor’s Note: We recently released the audio recording of our clinic on this topic. You can listen to a recording of this clinic here:

Landing Page Conversion: Getting Significant Improvements Even When You Cant Complete Your Tests

We conducted a 26-day experiment for a non-profit foundation that raises money for Alzheimer’s research.

The goal was to increase conversion and consequently increase the total donation amount.

Which donation page will convert better? 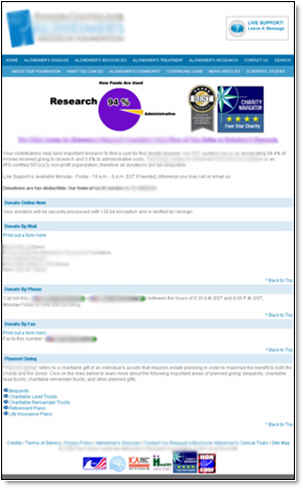 What you need to understand: To gain validity with a relative difference of only 0.14%, we would have to run the test for over 4,000 days.  Although the Control had a slightly better conversion rate, we CANNOT conclude that it was a better performing design.

However . . . the Treatment page had a substantially higher average donation.

So, if we eliminate “outliers” by filtering out all donations beyond two standard deviations from the mean, can we then establish validity using dollar amounts?

With outliers removed, the Treatment page still had a much higher average donation:

Can we wisely substitute dollars for conversion rate as the success measurement?

If we substitute average contribution per donor ($/donor) in place of the number of donors who contributed as a success measure, the validity test passes.

If we can establish validity using dollar amounts, then we might come to these conclusions:

Unfortunately, it is NOT valid to simply substitute dollars for donors. Even so, deeper analysis of the data does appear to indicate a consistent pattern of higher contribution amounts for the Treatment-2 page than the Control page, and this insight is a central factor as we design the next round of tests.

The Key methods for gaining insights for this case:

We conducted a 25-day experiment for an e-commerce site that sells wheelchairs and medical equipment to both businesses and consumers.
The objective was to increase the site’s rate of conversion-to-sale.

Which offer page will convert best?

What you need to understand: To gain validity with a relative difference in conversion of only 0.35%, we would have to run the test for over 179 days.  Although Treatment 2 had a slightly better conversion rate, we CANNOT yet conclude that it is a better performing design.

Since the test results were inconclusive, we should:

Remember, you are trying to challenge the Control with a Treatment that results in a significant (hopefully positive) difference.

Before we simply discard the data and write off the test as a failure, is there ANYTHING of value we can learn from this test?

Might we gain some insights from attributes beyond simply the overall test-long conversion rate?

Both with and without outliers, the Control page had a much higher average revenue per order than the other two pages–especially the page with the highest conversion rate in the test sample.

Key point: Supplemental analysis through removal of outliers does not change the level of test validity, but rather offers additional insights about the test subjects and the testing conditions.

How could treatments with such similar conversion rates vary so widely in revenue per order?

When we analyzed the test results on a product level, we noticed two subtle but very important patterns:

Observations and Insights for follow-on testing:

The key methods for gaining insights for this case:
We looked at characteristics beyond just the primary success measure of overall conversion-to-sale.

We analyzed the amount of variation in each variable by looking at measures of variance. Greater variance translates to need for larger samples. It is also an indicator of possible hidden sources of difference during the test period

We looked at the page performance data for each of the attributes measured and looked for connections between page design attributes and performance.
What kinds of circumstances would support this behavior? What inductive insight can we gain?

If you were in our last clinic on validation, you’ll remember the case study in which a test validated the first week, but by the end of the 2nd week, it did not.

What if the test had simply run both weeks and at the end of the test period, it did not validate?

One way of gaining additional insights into test data is to “disaggregate” it by different attributes.

Here, if you split the data into two distinct weeks, you see that the picture looks quite different:

The Control and Treatment 1 pages performed very consistently throughout the two-week test period.

But the Treatment 2 page bounce rate changed dramatically, soaring from 12.9% in the first week to 20.7% in week 2.

The cause of this change is still under investigation.

What can cause performance differences through time?

Are there recognizable patterns when the relative performance of the Treatments varies significantly? Could identifying them result in validation for a specific set of conditions?

Were there any “interesting” (i.e., test-threatening) events during the test period?

Unless you stratify your data, you will not know.

The key methods for gaining insights for this case:

We received an email from a long-time student with a question that dealt specifically with the interpretation of recent test results.

The student wanted help in interpreting the results of a four-treatment test that showed a “significant” difference among the pages tested but wanted to know whether they could establish a “winner.”
Which of the four rotations of graphics on the landing page will increase click-through?

We found the following:

What you need to understand: The sample size was big enough to say that there is a significant difference among the Click-Through Rates (CTR) performance of the four Treatments. However, if the first Treatment is the Control, then the sample is NOT big enough to say that the 2nd (“Family in car”) Treatment is significantly better than the Control. In fact, it would take more than 5 years to accumulate a sufficient sample to conclude this with a 95% level of confidence.

This means that we cannot conclusively say that any of the first three Treatments are “better” than another, using the data the student has collected to date. But, taking a closer look at Treatment 4 reveals a small but very important difference between it and the other Treatments.

Presuming that the (red car) image is the same one between Treatment 1 and Treatment 4, then the shape of the start box (rounded vs. square) caused a significant drop in quote-starts.

So, perhaps the square start box is superior.

You may gain other, similar insights for subsequent testing through this form of analysis.

Here are some principles and methods for judiciously gaining insights from an invalid test.

Remember, it is more important to conduct a useful test than a successful one.

To learn more about our key methods for gaining insight into invalid or incomplete tests, consider enrolling in the MarketingExperiments Professional Certification course in Online Testing.

Flash for newspapers: Ads don’t require dead trees, and neither do you